Sad to say, it is our last morning at the lodge.

This morning’s bear is headed away from us. 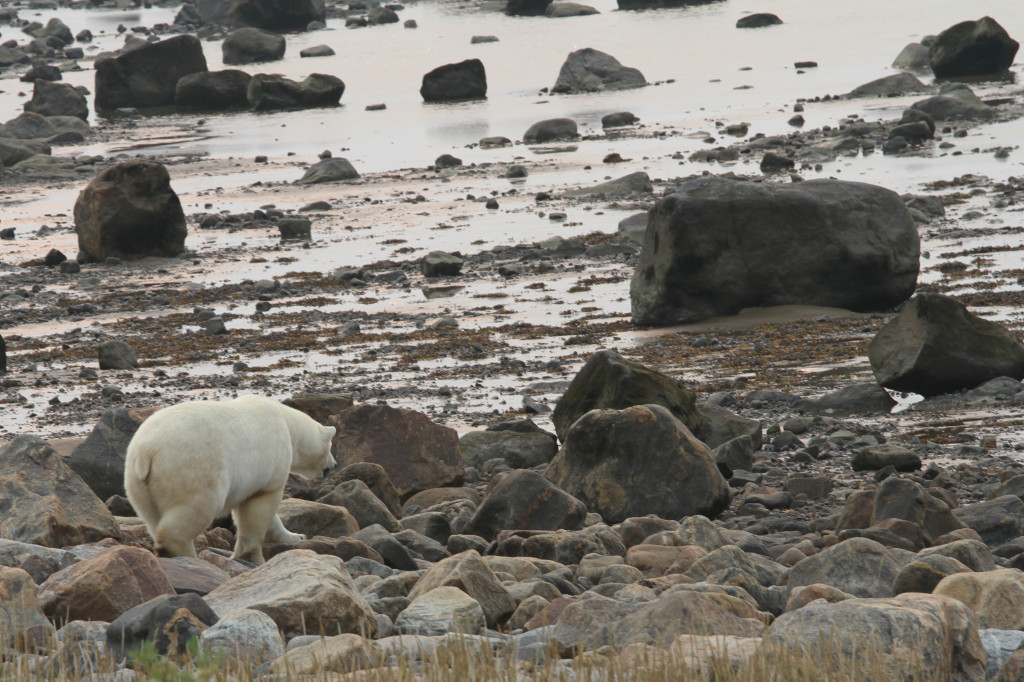 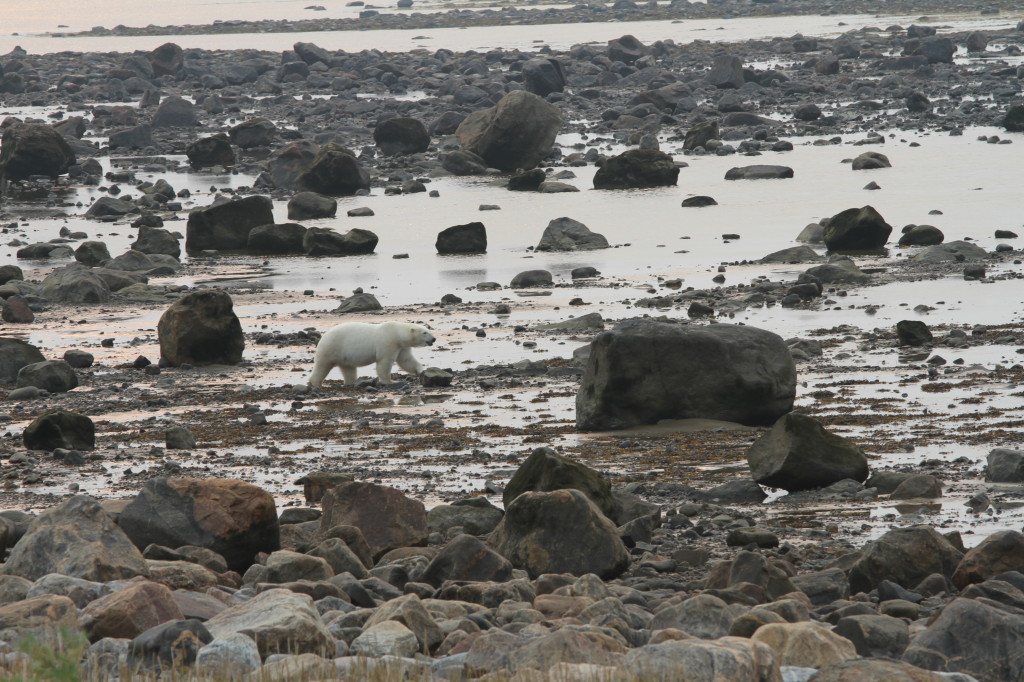 Time to pack, vacate our rooms so the Lodge team can ready them for the next group,  and to wait for the plane.

Except the plane doesn’t come. Instead of a plane we are to get a helicopter ride back to Churchill – an exciting end to a magical week. To this point I had flown in  a lot of light aircraft,  my father had a private pilots licence and I’ve worked in remote areas in Australia, but no helicopters. Looking back at other people’s blogs, this has happened before and been met with the same sense of excitement. The luggage is to go by float plane.

Breakfast is special this morning – its dessert for breakfast, in the form of brioche warm from the oven. I’m so sad my tummy just wouldn’t take any more!

Before the helicopter rides begin, we go for our obligatory a stroll. No bush bashing and scrambling today – a dry walk in deference to us being dressed for travel. 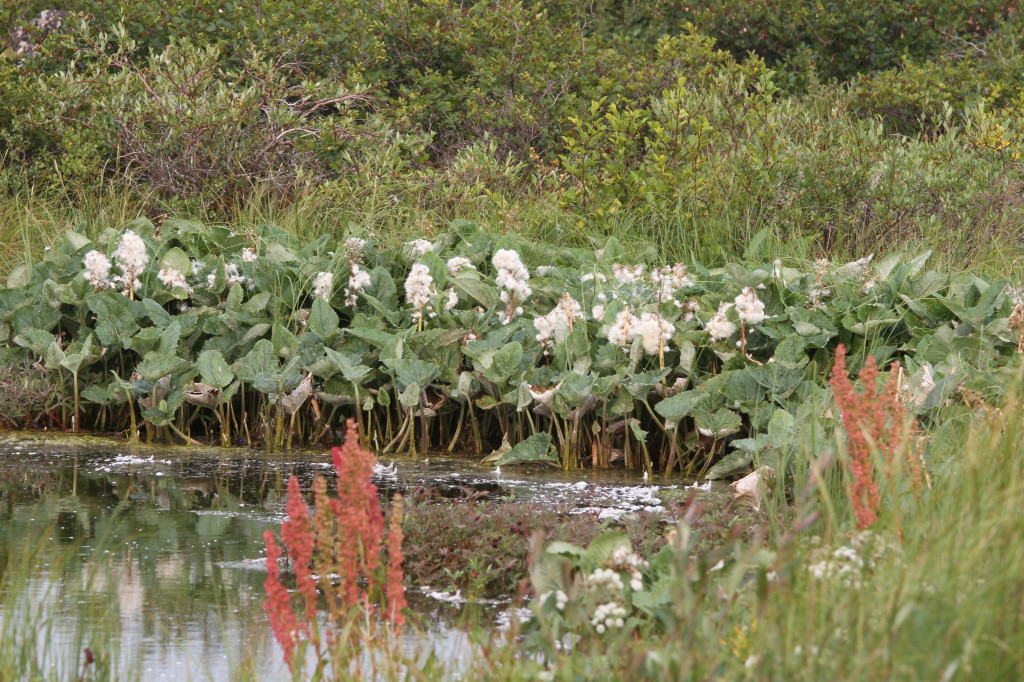 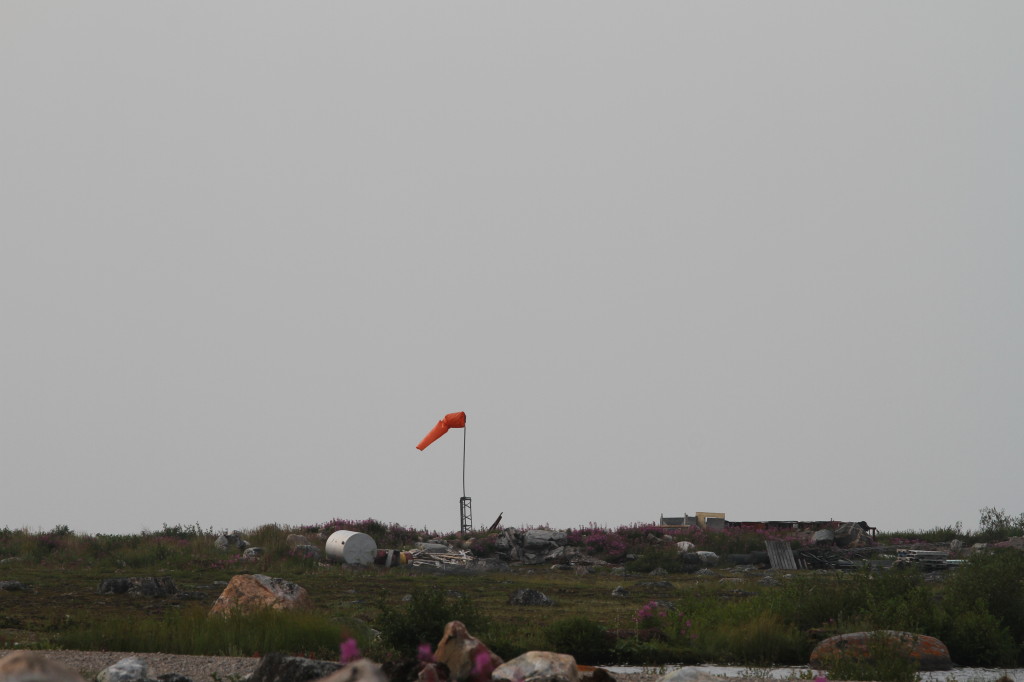 Now comes the wait for the helicopter.

The day is really warm, even with a strong breeze. In an attempt to find cool spots there is a fair bit of wandering around the Lodge.  I spend some of my waiting out on the front viewing platform, contemplating the landscape and some of its inhabitants one last time.

While I knew it got warm in the sub-arctic, experiencing it is another matter – the water, even at ten degrees celsius and with the potential for bears, looks really inviting. I don’t have the fortitude to follow through on mien hosts suggest “you fill your boots girl” on the swim thing – it would have been a sub-attic plunge.

Space limits the numbers that can travel in the helicopter, which means multiple trips and we are in the next to last group to fly out. This means we are “forced” to eat another delicious lunch at Seal River. 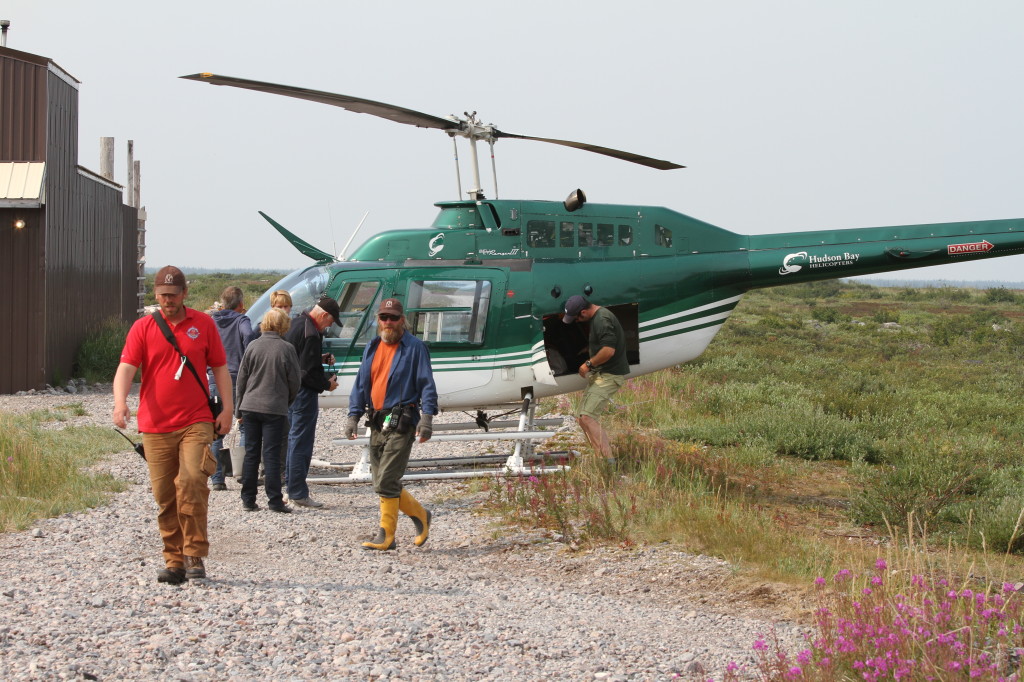 As the helicopter takes off I race up the tower to document its departure. 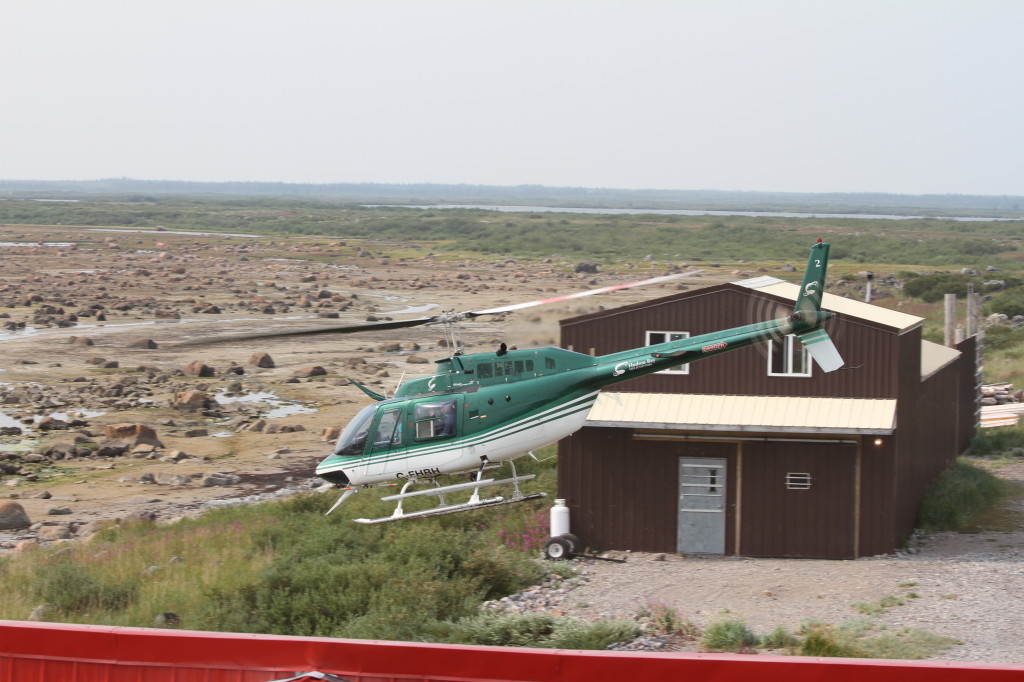 On my way up the tower I pass one of the new guests. He has a big cannon camera (1D) with a F series 100 to 400 lens and is eager not to waste a moment. I point out to him the Chinese guests out for a hike away in the distance and just in front of them Mamma bear and her two cubs in the water. It takes him a moment to locate the bears as he wasn’t expecting them to be in the water. I leave him enthusiastically snapping away. 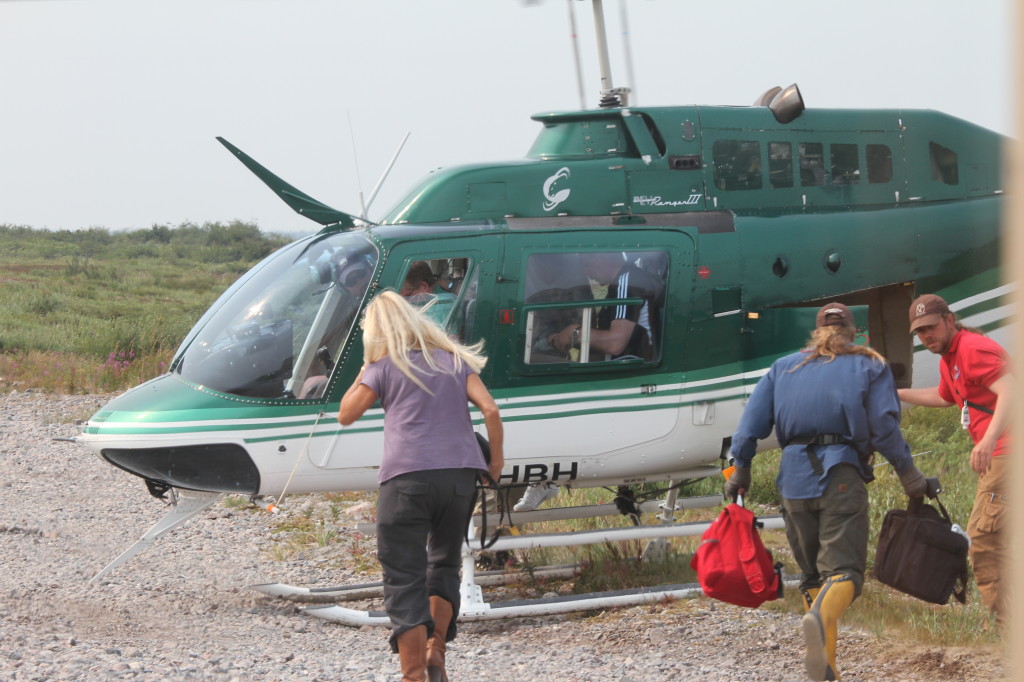 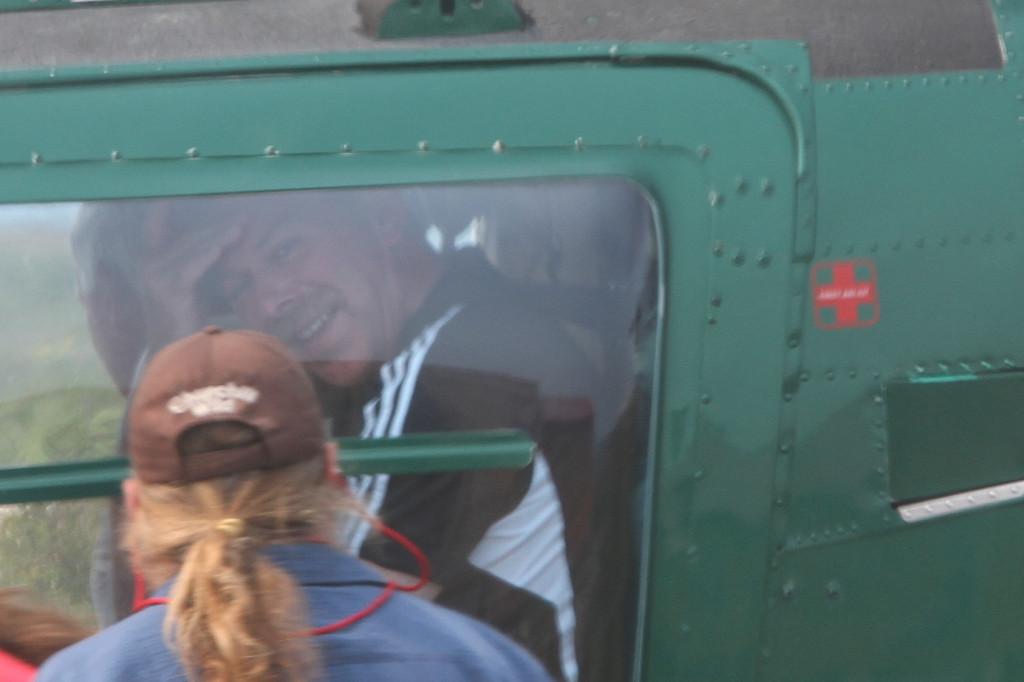 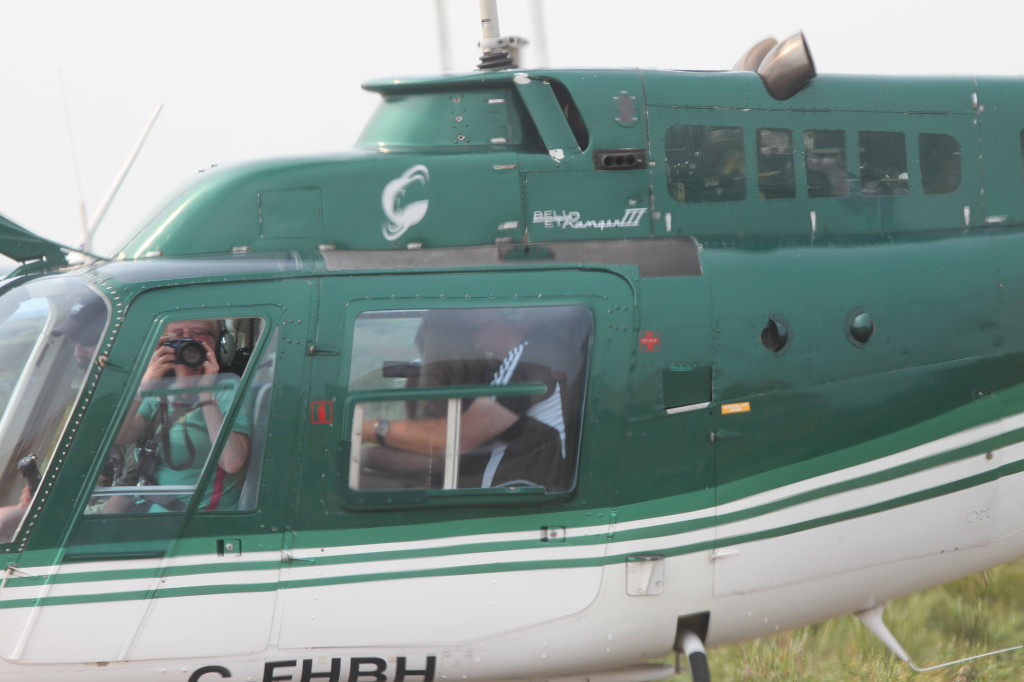 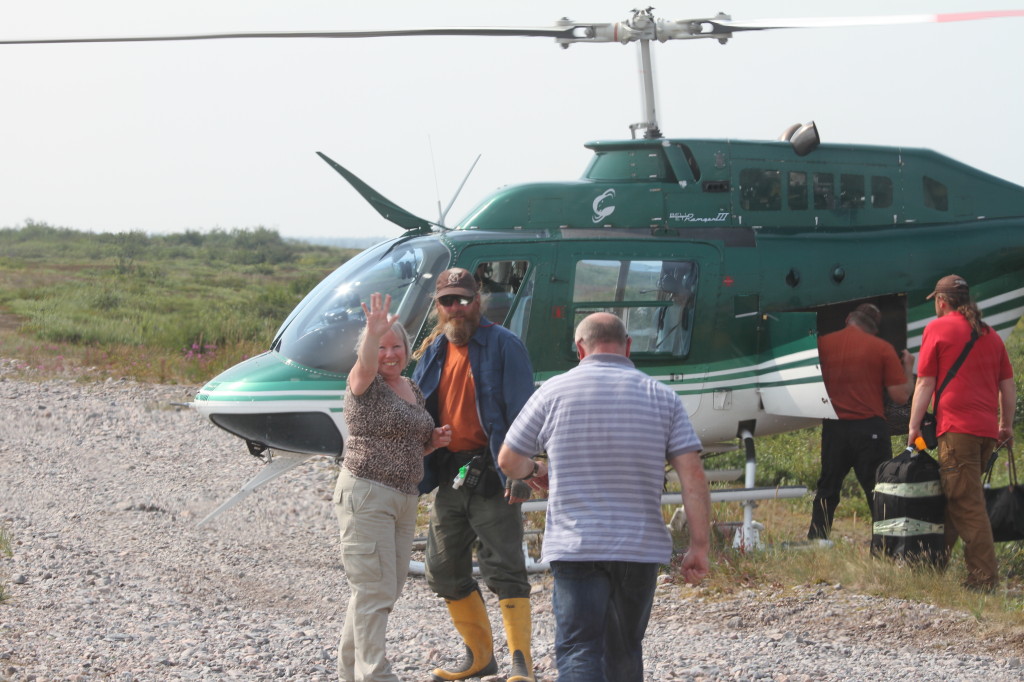 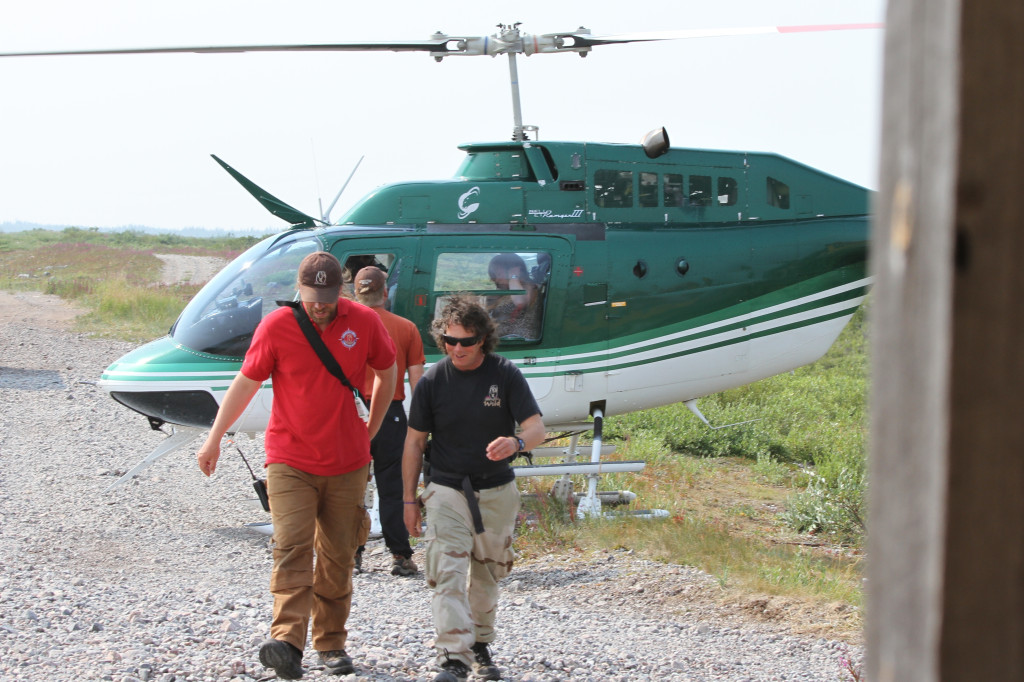 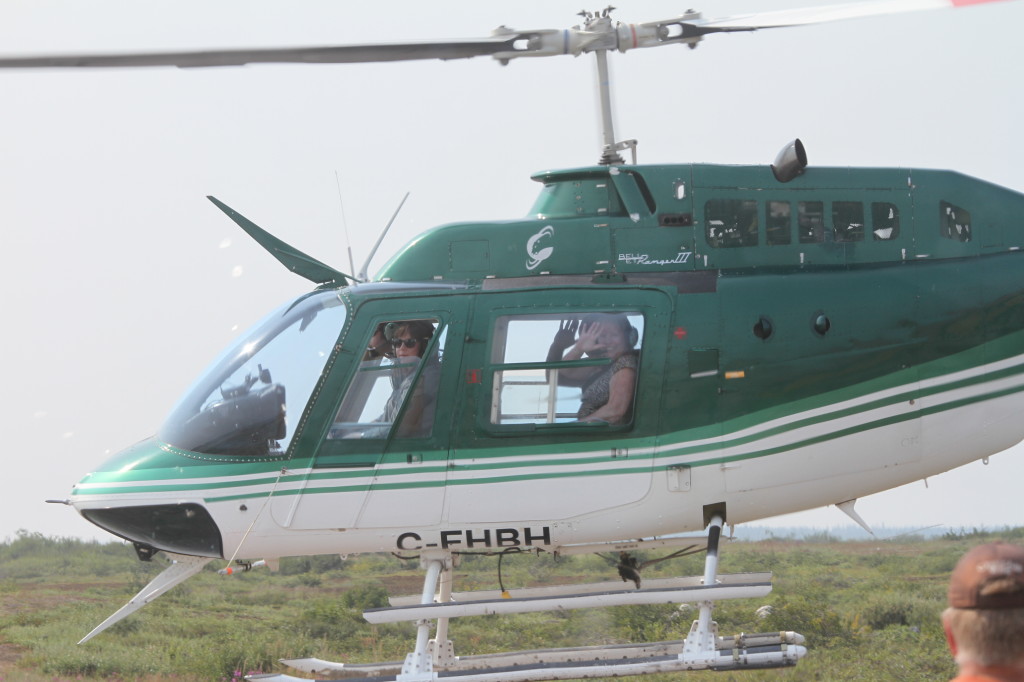 While we wait, the tide rises – there is about an hour between the photos below. 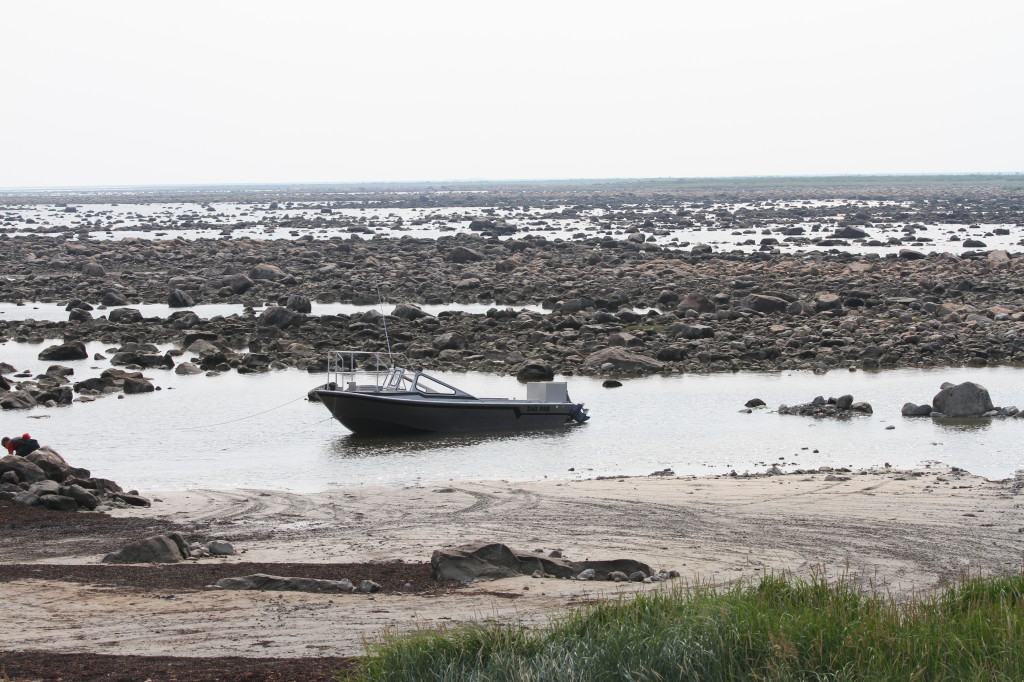 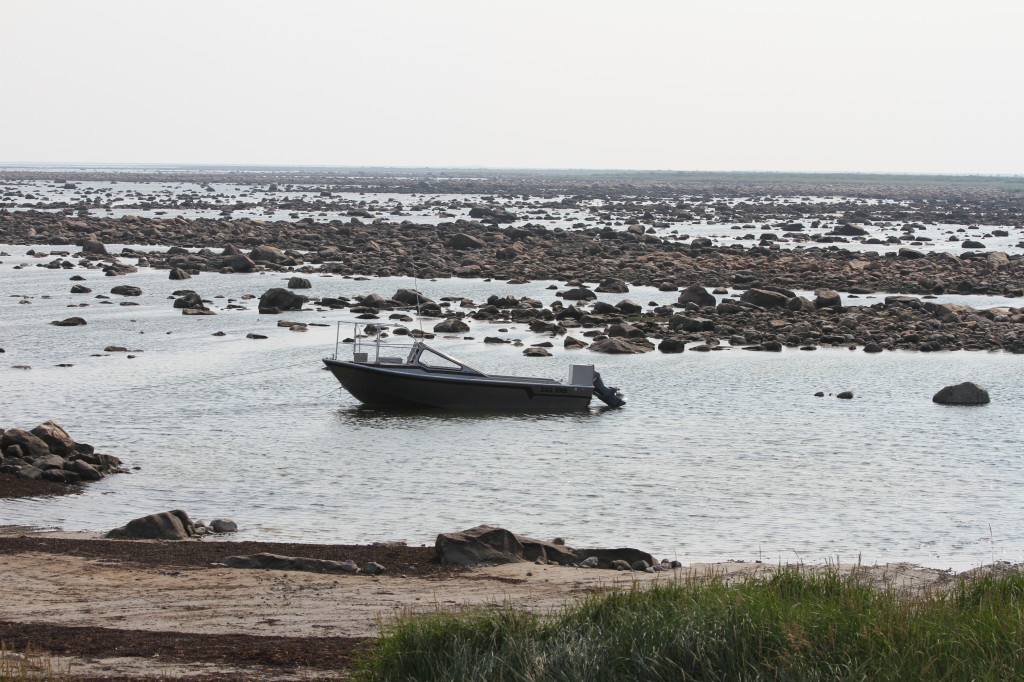 Finally and somewhat sadly, it is our turn to fly.

On the way to Churchill we fly over terrain that we had driven over in the six wheelers. Our tracks and those of other groups visible from the air and likely to be there until the snow comes. 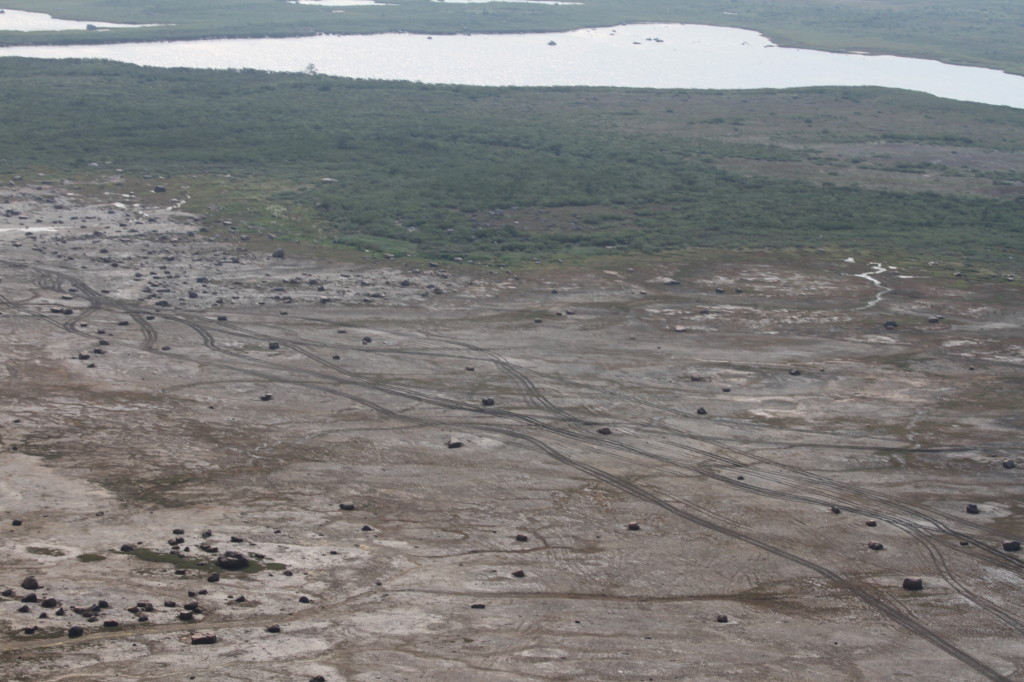 The bay is still full of Beluga whales, some of the clusters are quite large. Charlie gets some good shots with his Sony Camera (I’m on the wrong side of the Helicopter). 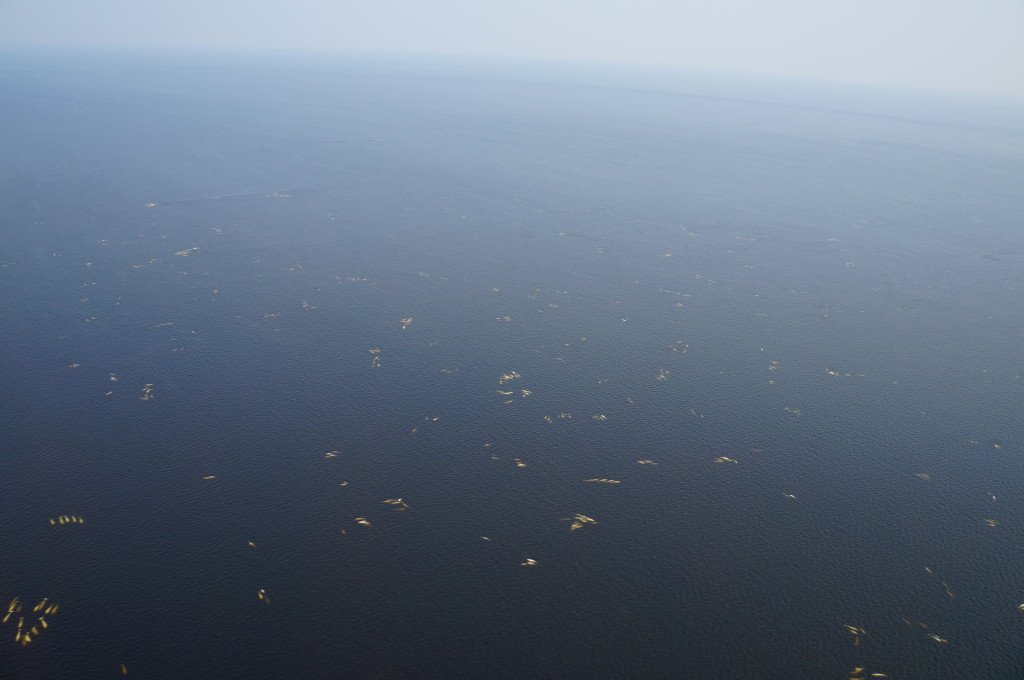 As we cross the pilot spots a bear in the water.  The bear has a Beluga whale by the tail. 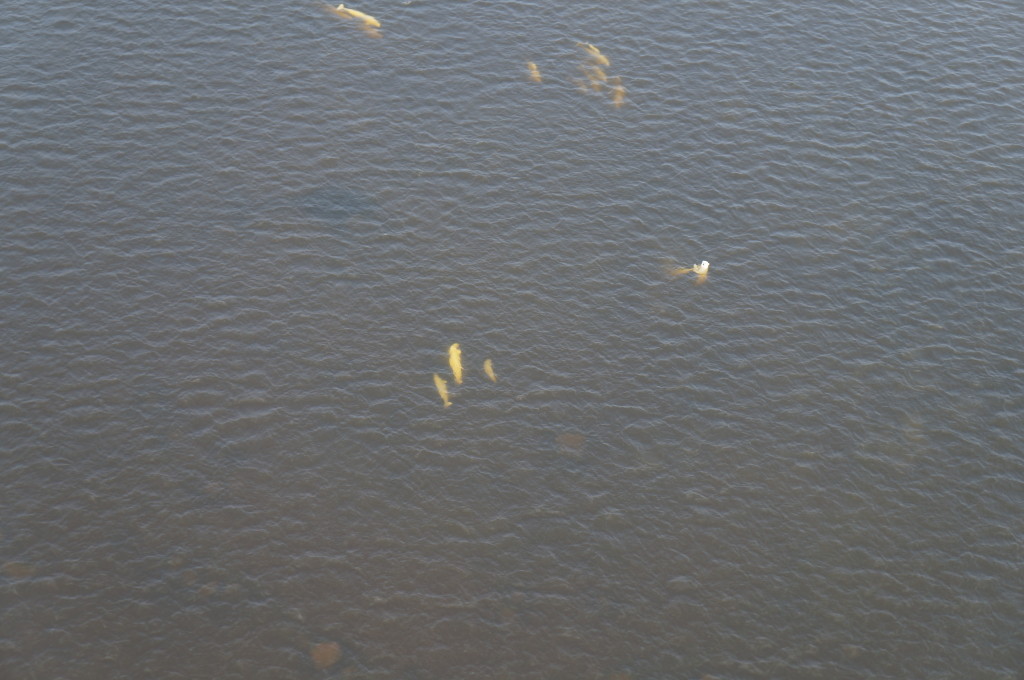 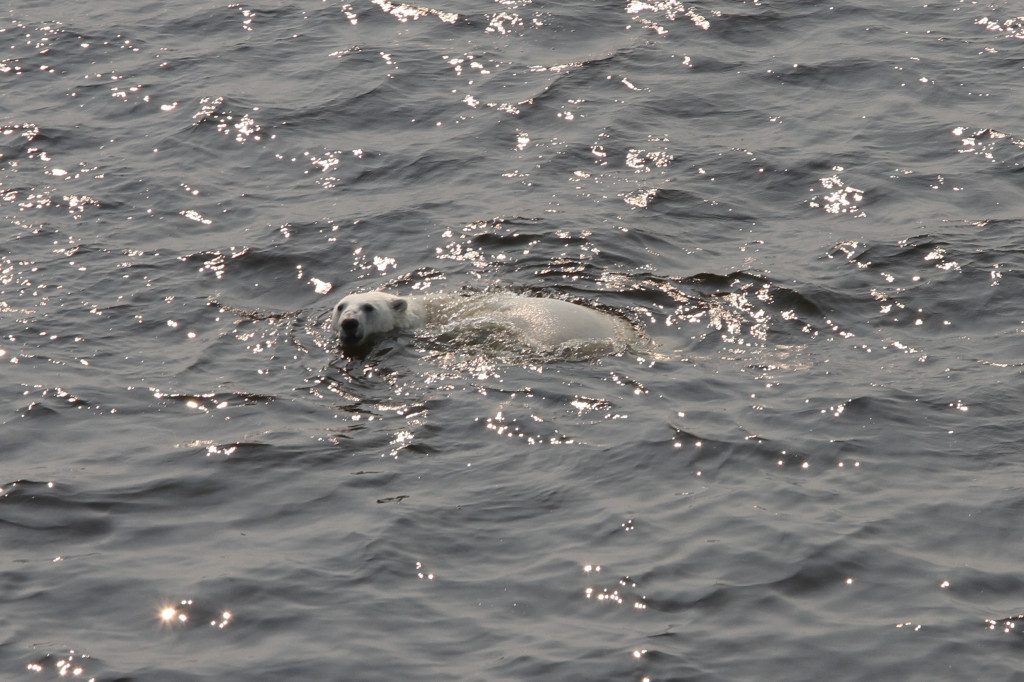 We fly on, following the coast and then crossing over Hudson Bay toward Churchill. 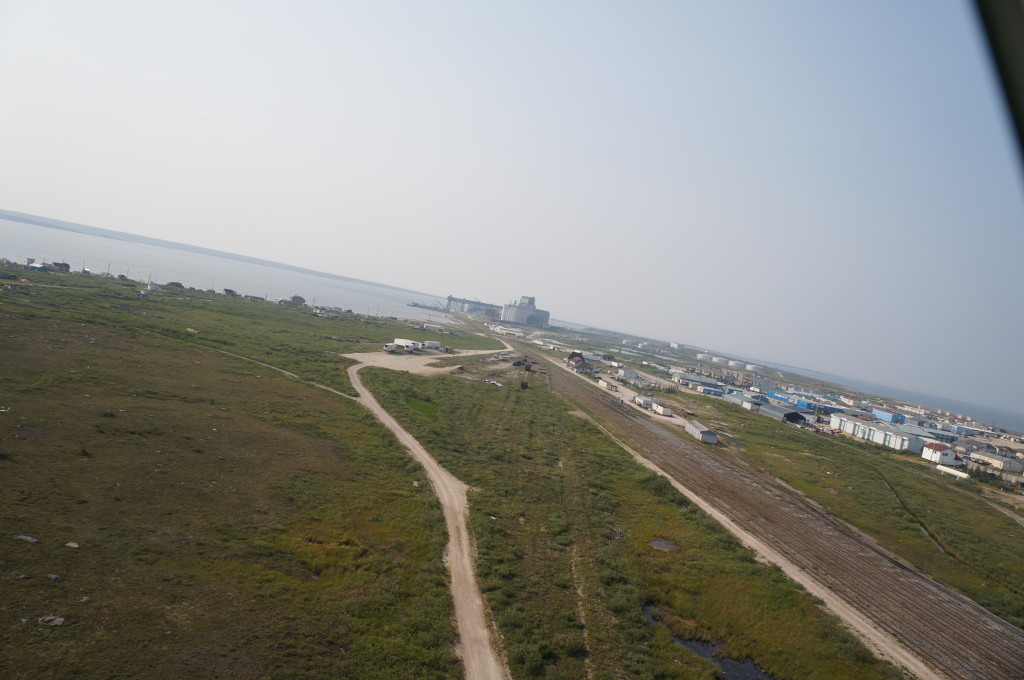 At Churchill the enthusiastic and helpful Stacey meets us, she takes us on a quick run around town, then out to the airport to check that we will be able to get the Copter case on the flight (given the issues we had on the way up). Turns out not to be a problem as the flight isn’t totally full and no freight to be accommodated. Stacey drops us in town to look around and have a bite to eat before our 8pm flight (this is essential, as no food on the flight).

We’ve seen surprisingly few “northern” breed dogs on our trip so far, and it was a treat to meet this cute pup outside the Trading post. 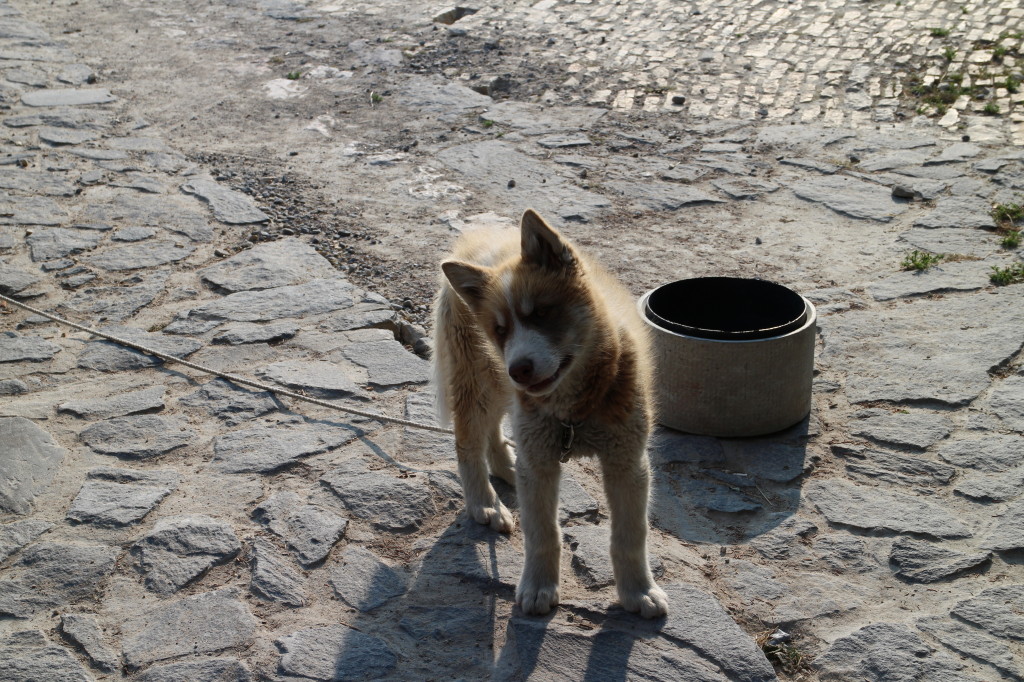 Churchill is not much to look at, but friendly and  the food and beer is good.  Even this far north, fairies or ballerinas are still in vogue.

Then there is the ute with its own power cord – we assume for the heater unit to keep it warm enough to start in the winter. 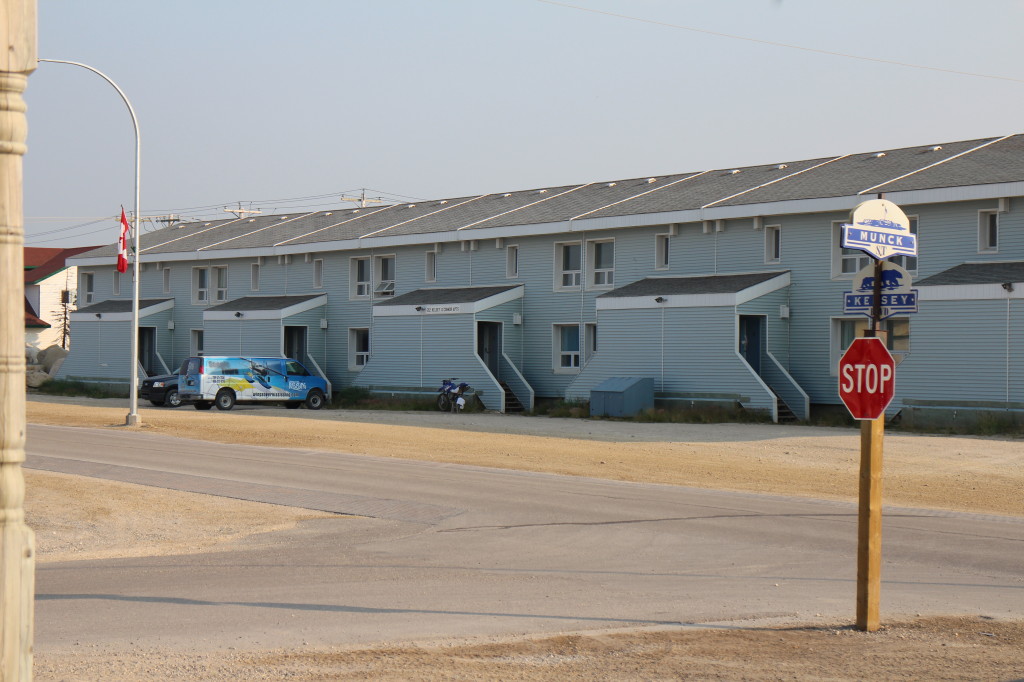 Finally, Stacey comes to pick us all up and drop us at the airport.

The flight back to Winnipeg is uneventful. Some of us are still together as we check into the airport Sheraton, and vow to meet for breakfast. Our group of thrown together guests has been an amazing good humoured and cohesive group, never short on a helping hand or someone to chat to (or a bad joke).

Our Churchill Wild adventure is over, time to start the journey home and the planning for the next adventure – maybe in the fall (Autumn) to get photos of bears in the snow? As well as bears in the snow, I still have wolves to see and those little arctic foxes.