If you have read my other posts you will have worked out that the pattern of our days involves a hike after breakfast and some sort of major outing. The plan for day five is to take the Zodiacs to Hubbard Point, an hour or more north. This area has archaeological significance, as well as being a haven for many bird species.

A group of Chinese guests had been camping out at Hubbard Point on Fire Weed Island photographing the birds (plus Polar Bears of course and even a little arctic fox).

The group’s pictures and camera gear is amazing, as is their intense focus on taking pictures.

Until the tide comes in, we go out for a hike. Bears have been spotted on one bear point, the next point over from the lodge – Andy (Guide) thinks it may be a mother with a cub or maybe two. The best way to approach without spooking them is through the rocks, mud flats and pools of the intertidal zone.

Entering the intertidal zone puts us below the line of sight of anything lying in the grass or rocks. It also provides cover in the form of people high rocks, which lowers our profile, hopefully reducing the threat to the bears as we approach them. Going head on to a bear is a challenge, so the technique is to move in obliquely.  With such a large group we lower our profile by walking in single file. 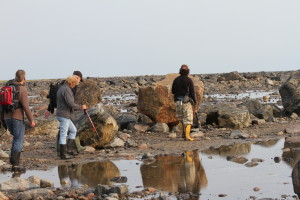 When we do bunch up, the aim is to have rocks or something in front to obscure our size (you only want size if the bear decides to approach). 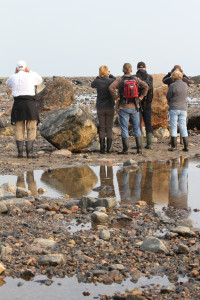 Our slow, quiet approach (very hard keeping this group quiet, but the prospect of bear cubs is an incentive) pays off. While the two babies notice us, and keep bobbing up and down, mamma bear seems unconcerned. 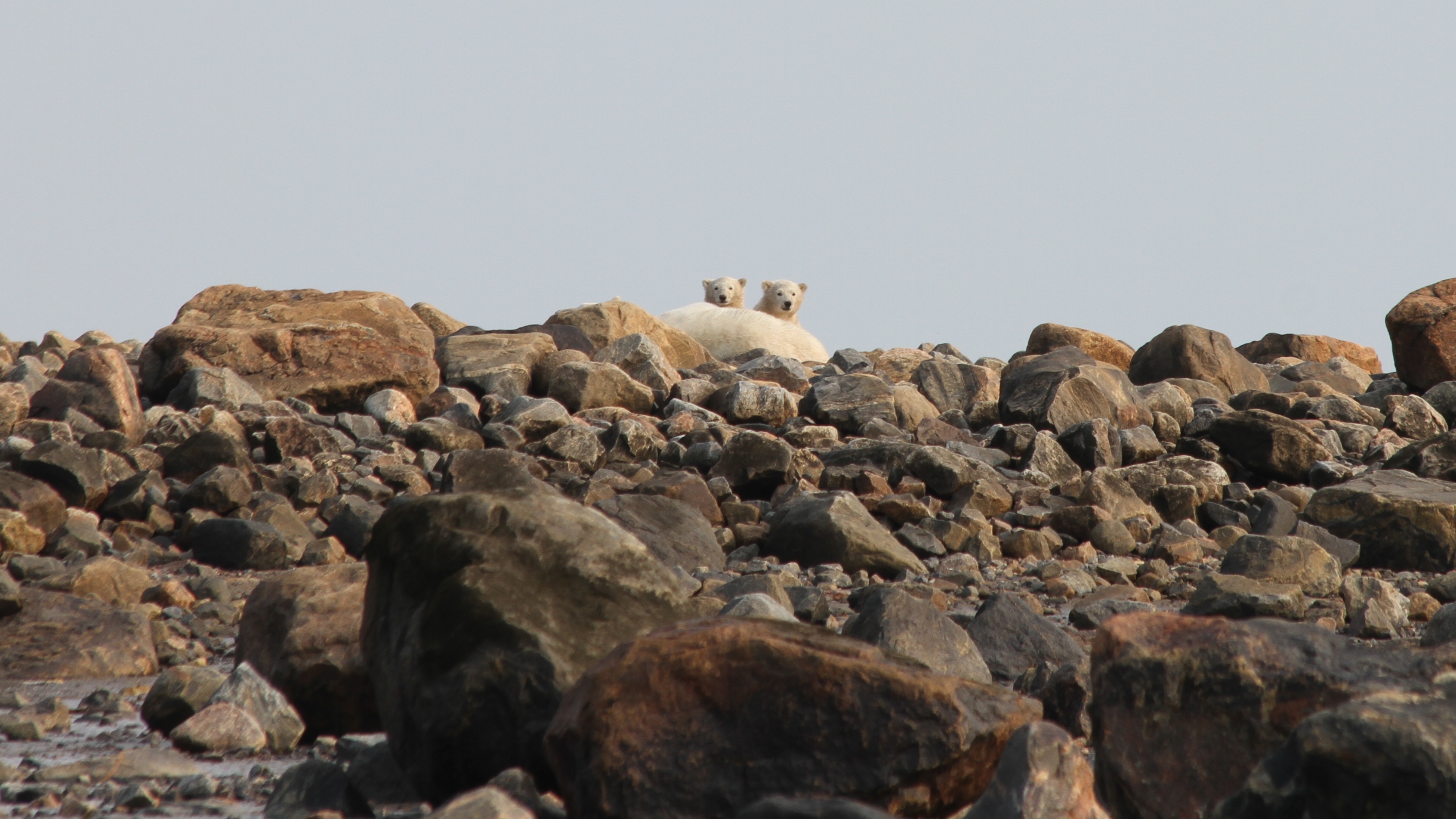 Raising cubs is exhausting and mamma bear puts here head back down,  no reason to waste energy if there is no immediate threat. 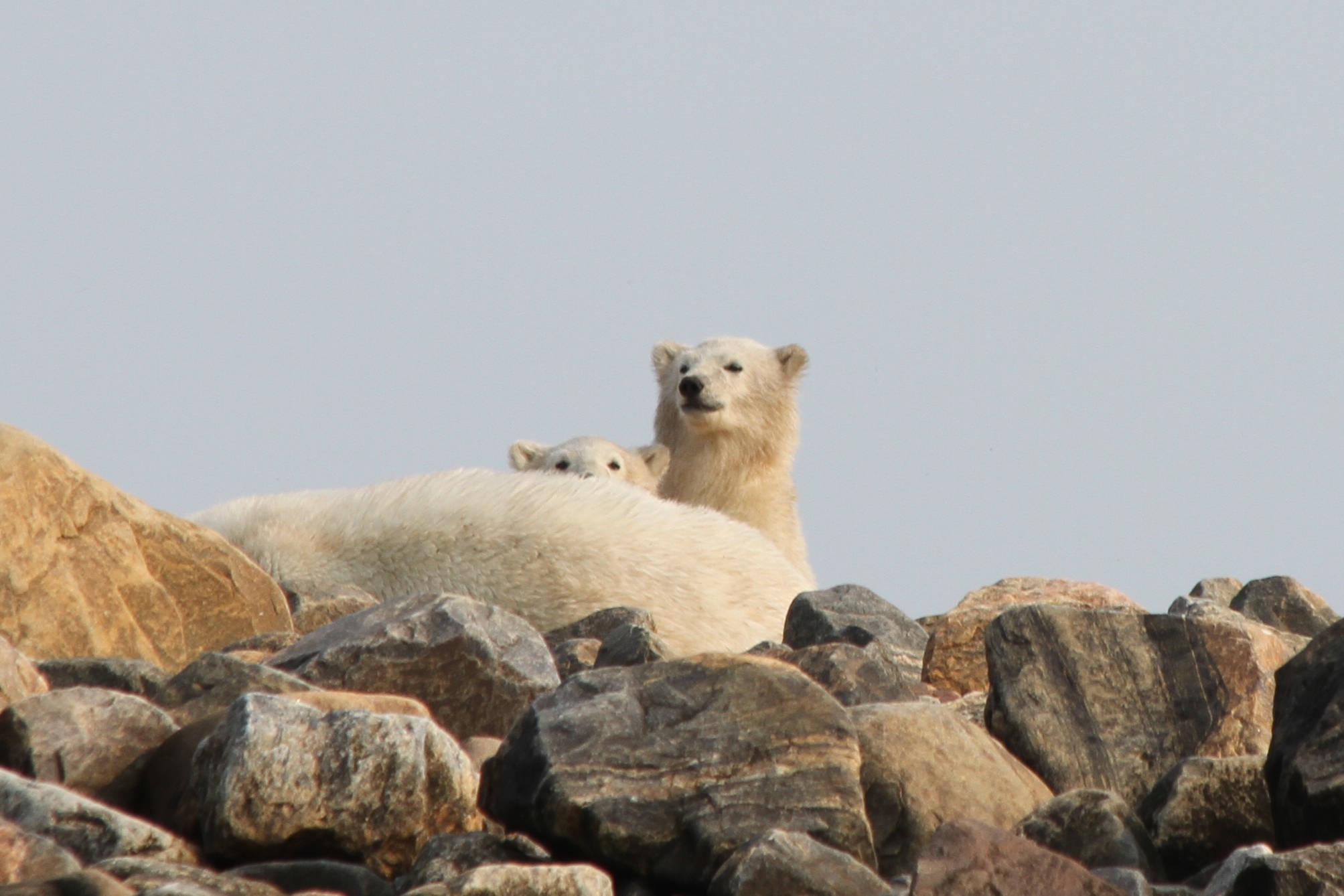 We take the opportunity of mamma bears unconcern to move closer (although we keep a respectful distance given the babies). The youngsters decide that its time for a feed, which includes squabbling – apart from some hissing to warn each other off, this is the first time we’ve heard much noise  from any of the polar bears.

While we watch, mamma bear settles down to feed her voracious pair, turning her back to us and staring out to sea. 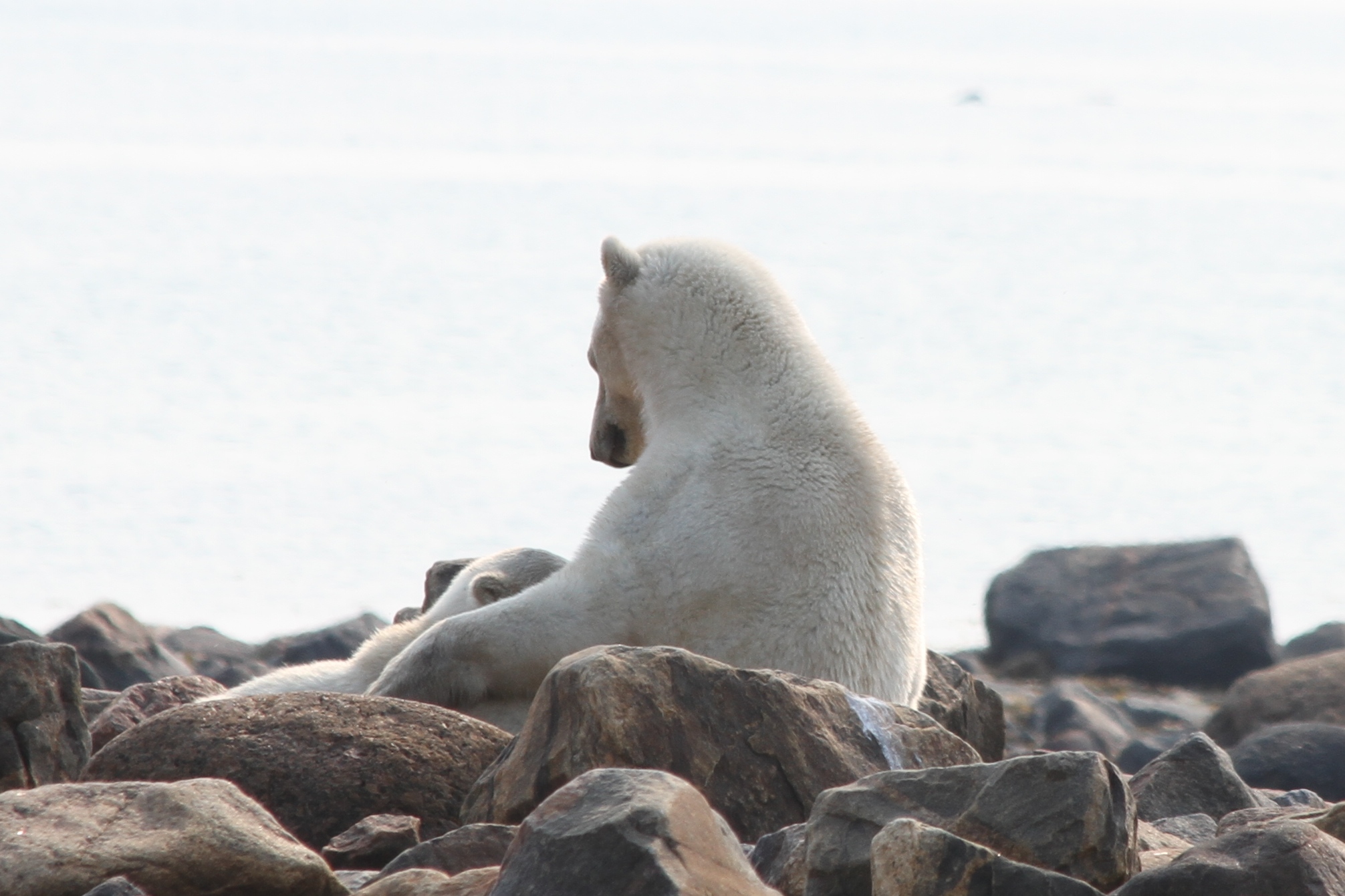 Once dinner is over, mamma settles down for another nap.  We move quietly off toward the lodge, delighted with our encounter and ready for our outing.

The wind has come up and the sea is choppy, making for a bone jarring trip to Hubbard Point that takes longer than expected. I’m suddenly grateful for the core exercises I was doing daily for a couple of months before the trip, as my back copes surprisingly well. One of my companions suggests its like riding a horse.

Aches and pains are suddenly forgotten when we see a dozen or more bears on the beach in front of us. By the time the cameras are out a number of bears have already hightailed it over the hill. 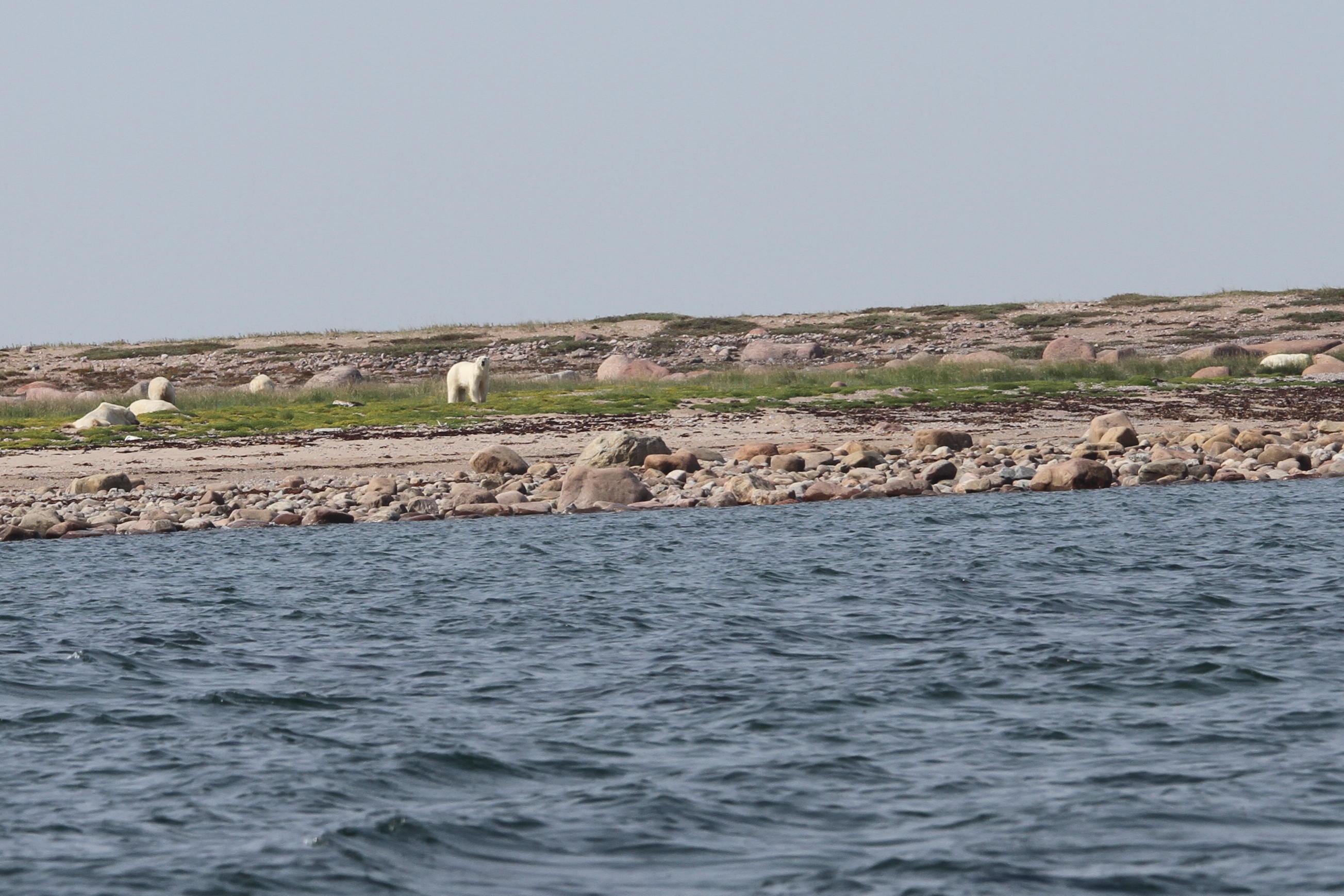 Several bears can’t be bothered to go far at any speed. 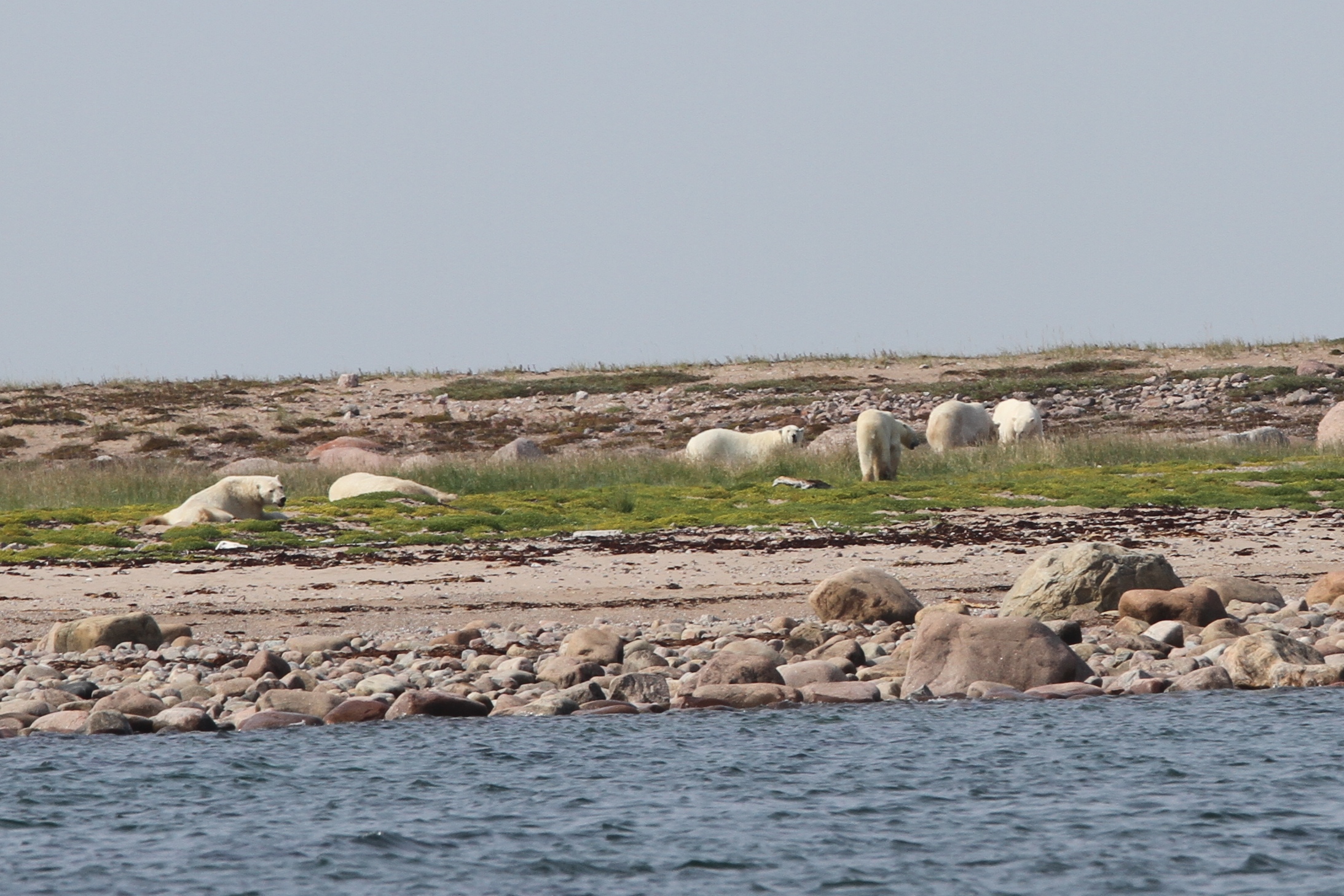 There is a fair bit of milling around and some nose touching before more bears leave. 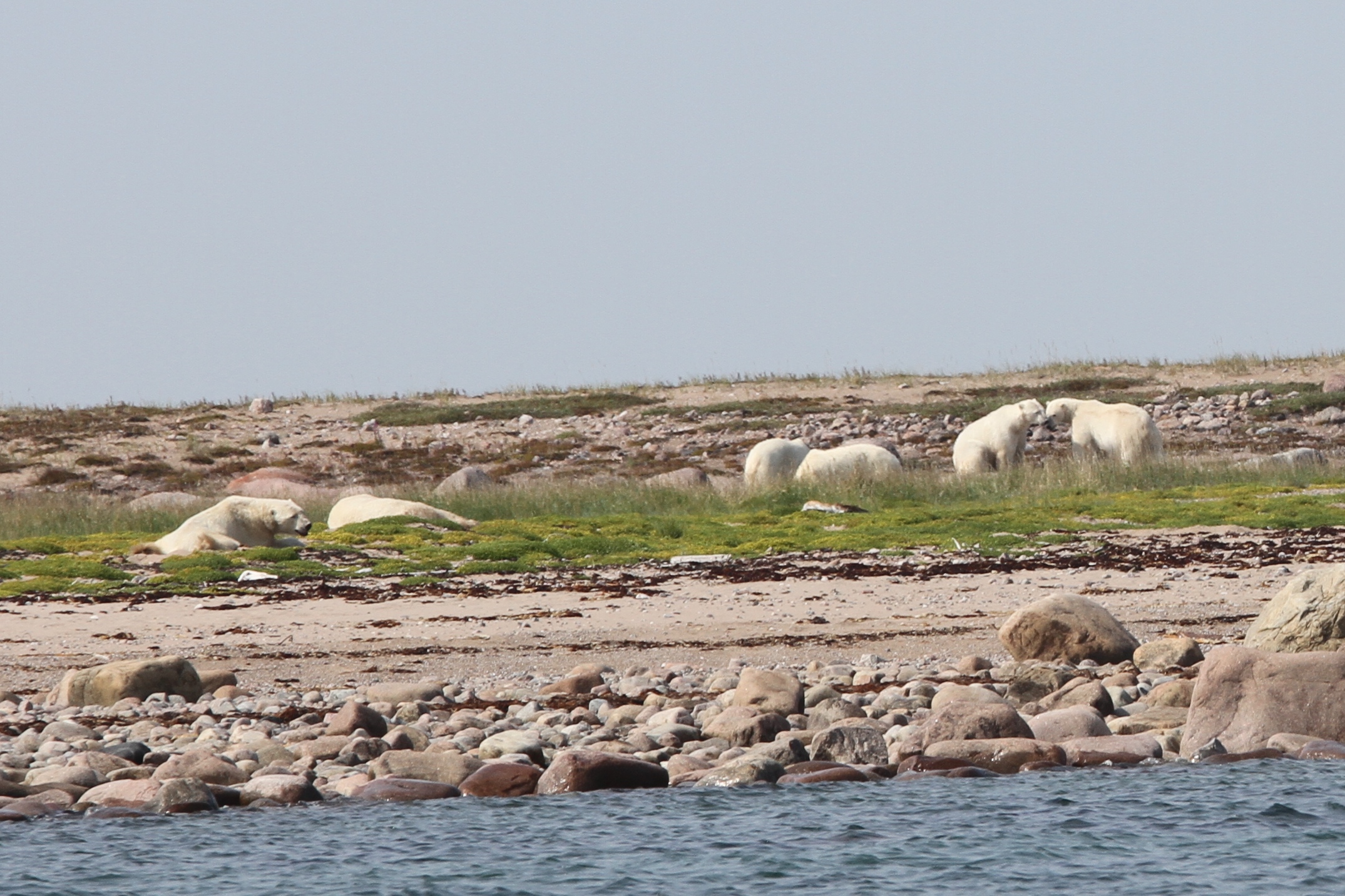 This group of male bears peacefully sharing a beach challenges the stereotype of polar bears as aggressive loners. Yes, I can understand that once the ice forms all bets are off, but here is the evidence that bears can get along (heaven help us if they ever decide to hunt cooperatively – the bears may inherit the earth). 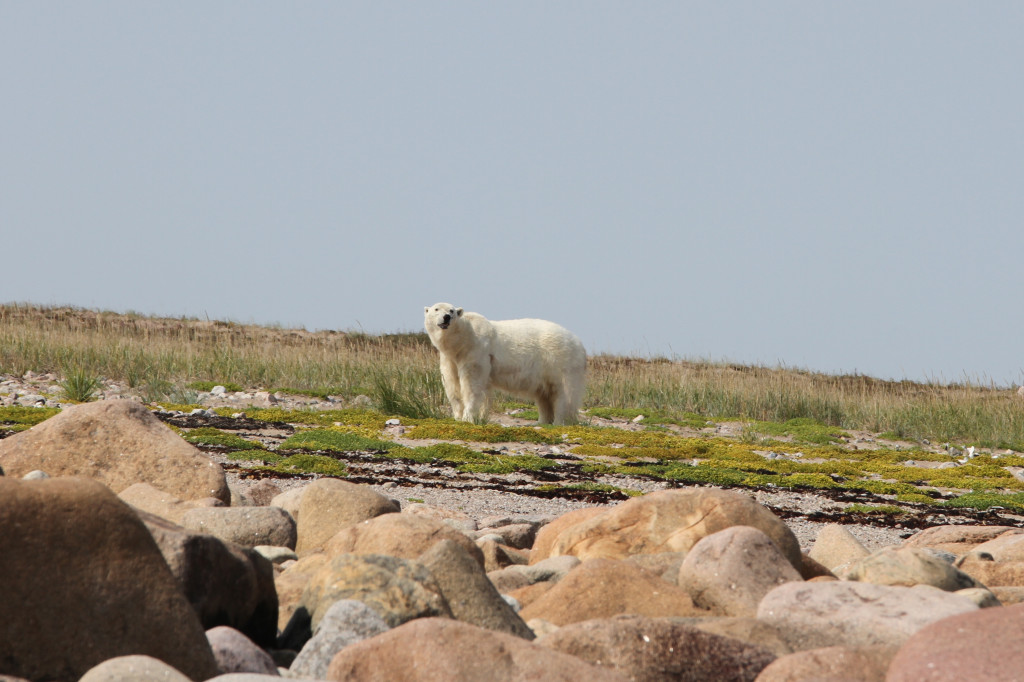 One big old bear sleeps through the exodus of bears. His buddy seems to be standing guard over him. 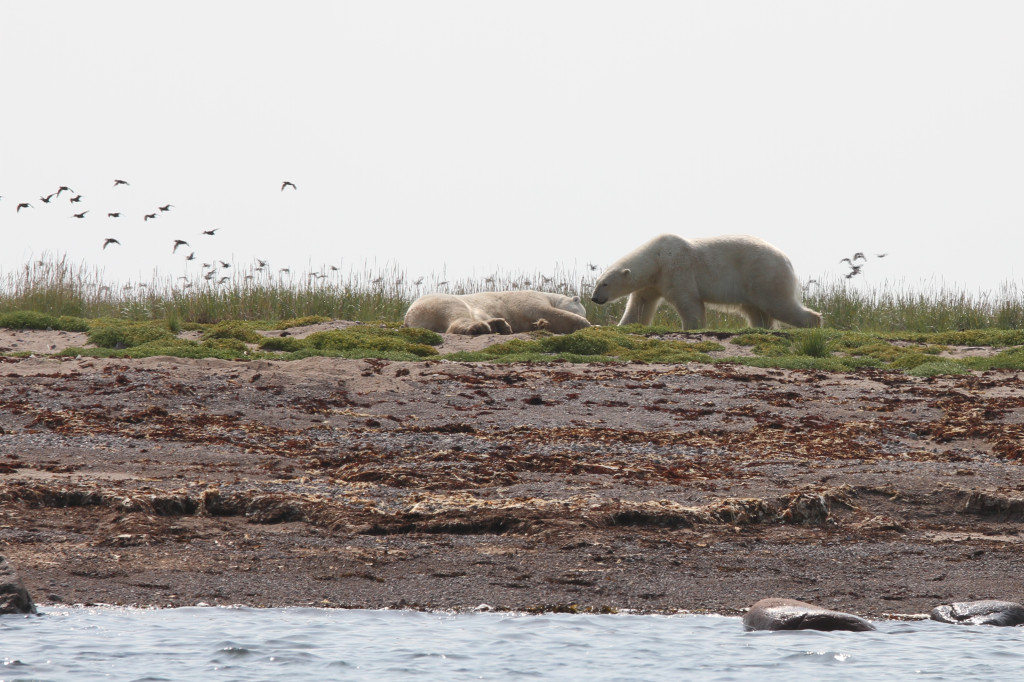 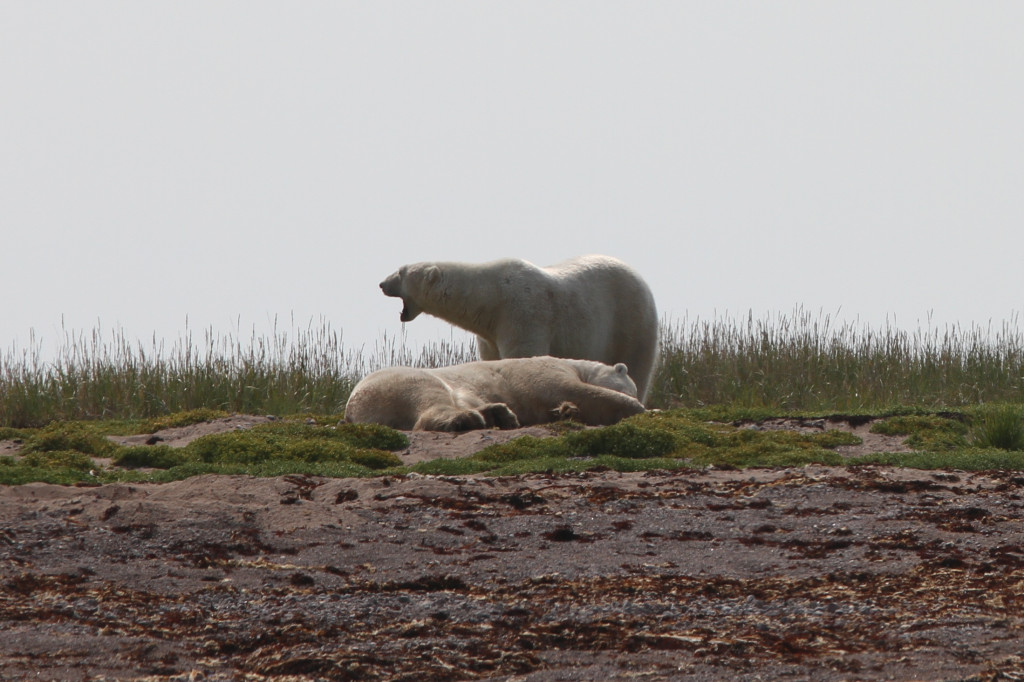 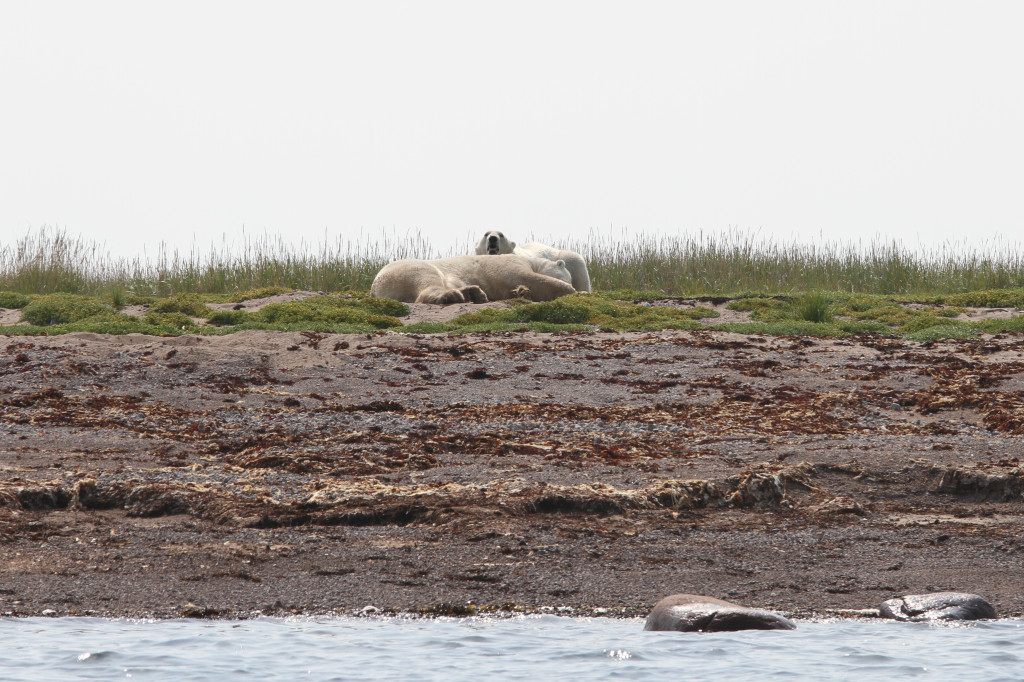 Finally the big old bear awakens, surprised to find a mob of tourists with cameras pointed at him and lopes off (sorry, missed the shot, but imagine a very large bear making a very quick but lumbering exit over the hill, followed more slowly by his puzzled guard bear, pictured below). 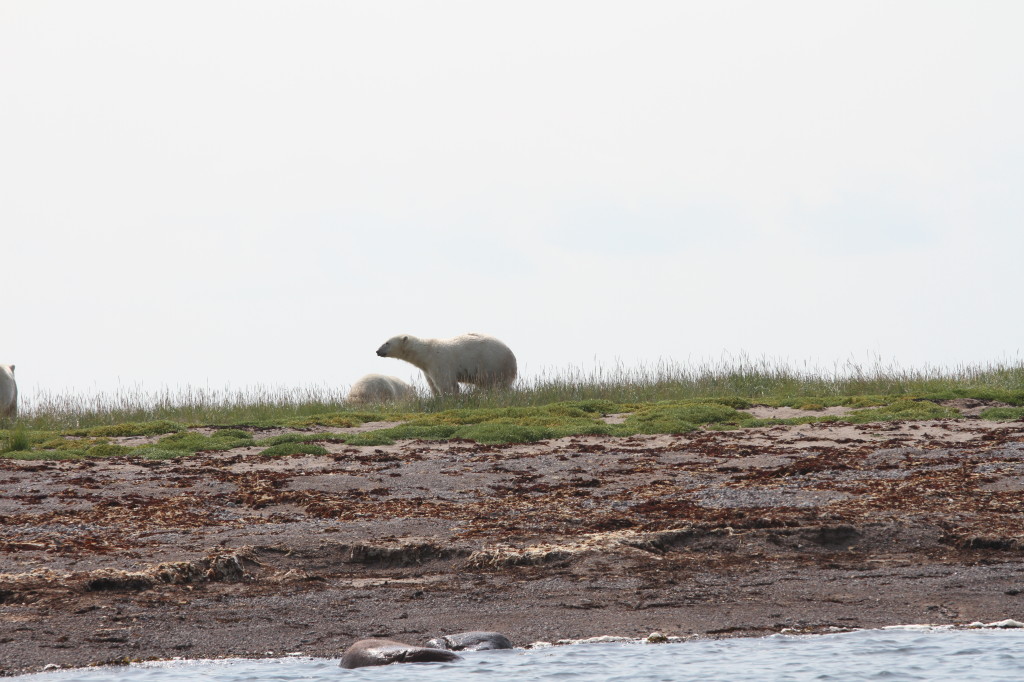 The waters are much calmer close into the shore, and we head into a beach around the next point, hopefully away from the large number of departing bears. 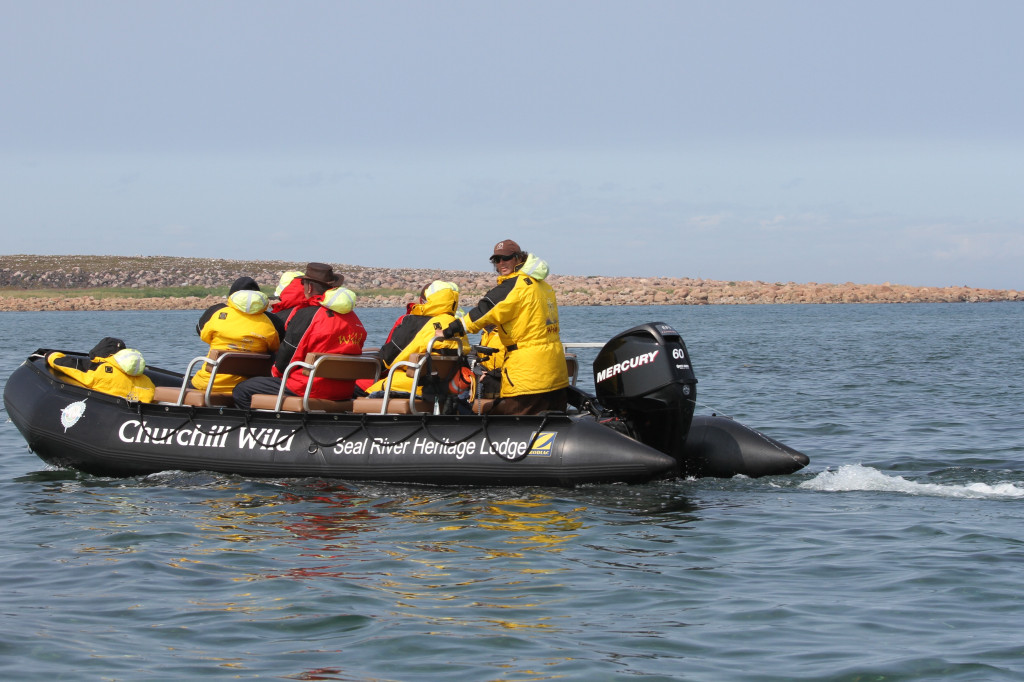 There are large numbers of Beluga whales here, and a two people on the point with a professional movie camera trying to capture them. 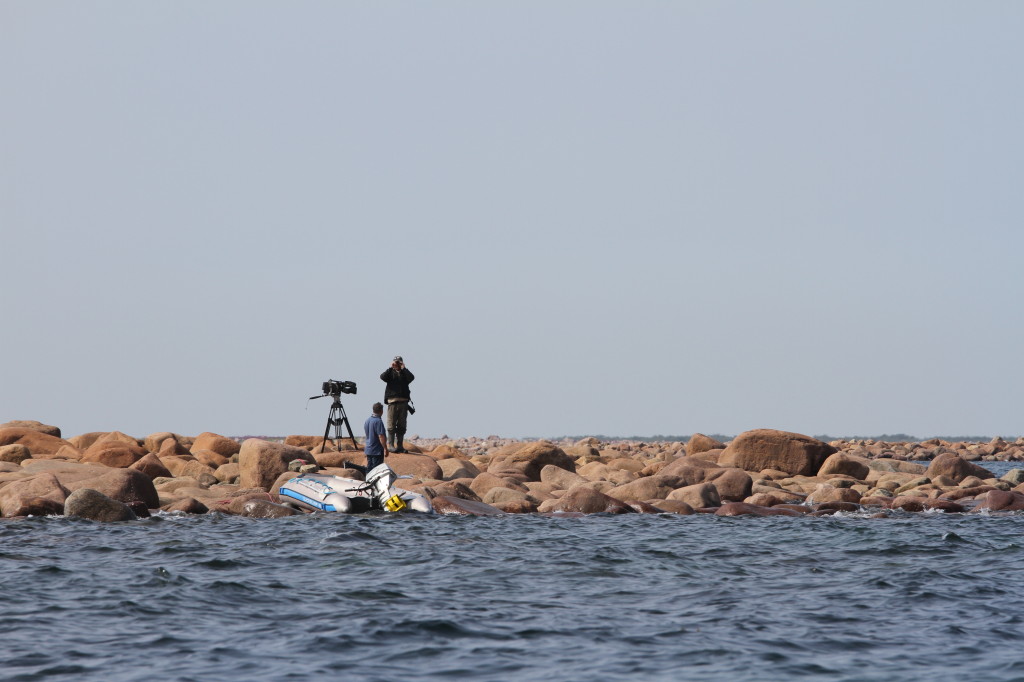 The beach we pull into is full of birds. Even if you get very close and they take flight,  they return quickly. 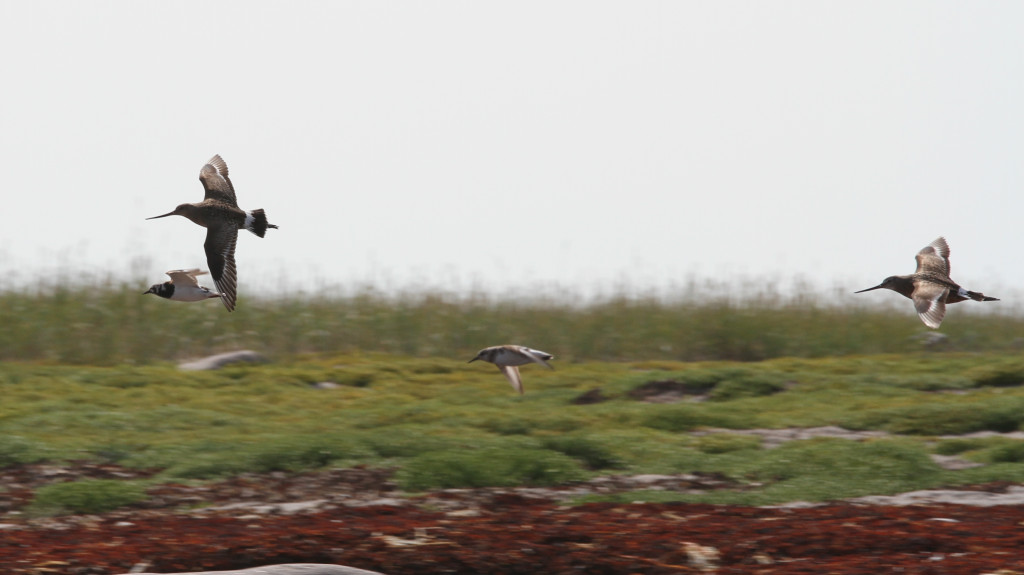 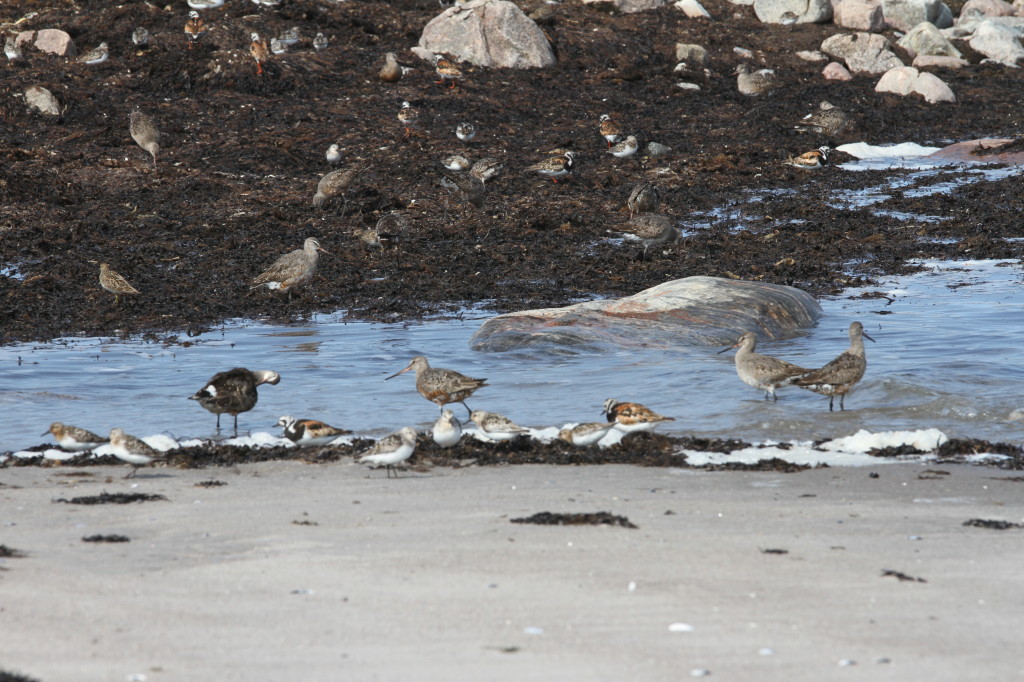 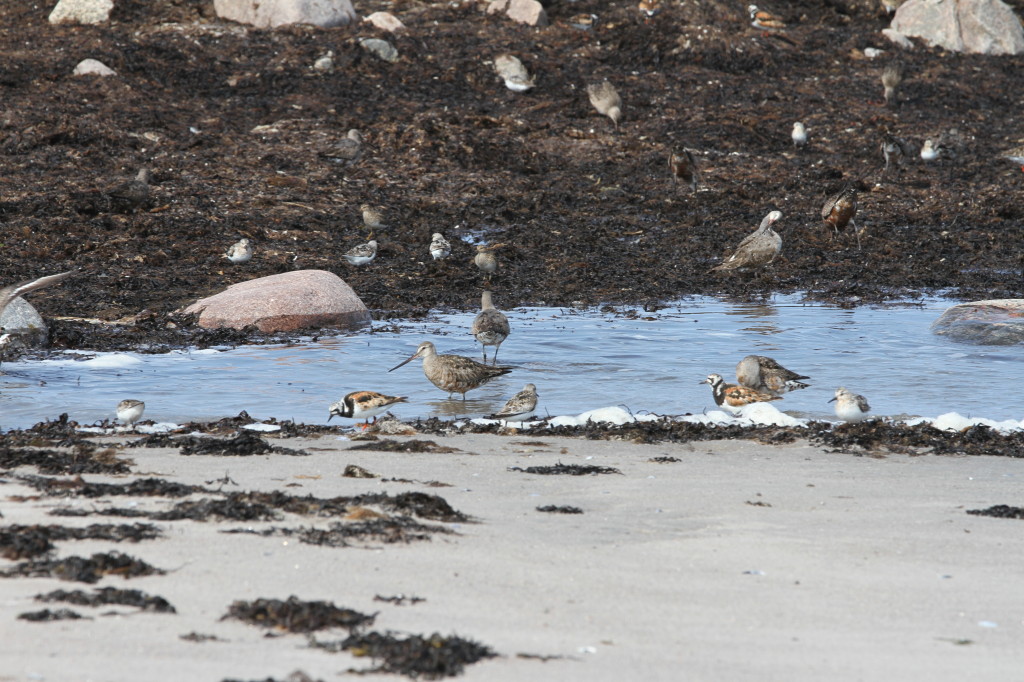 Bears and birds are not the main reason for visiting Hubbard Point. A large Thule (who pre-date the Inuit) whaling site was re-discovered recently at Hubbard Point. This consists of at least 67 huge stone features, including tent rings, caches, kayak rests and graves— all estimated to be about 1,000 years old. On top of the stone tent rings wood or whale bone structures would be built and covered by hide.

Archaeologists suggest the settlement may have been permanent. The Thule first settled in Alaska before moving eastward into Arctic Canada and Greenland about 1,000 years ago. 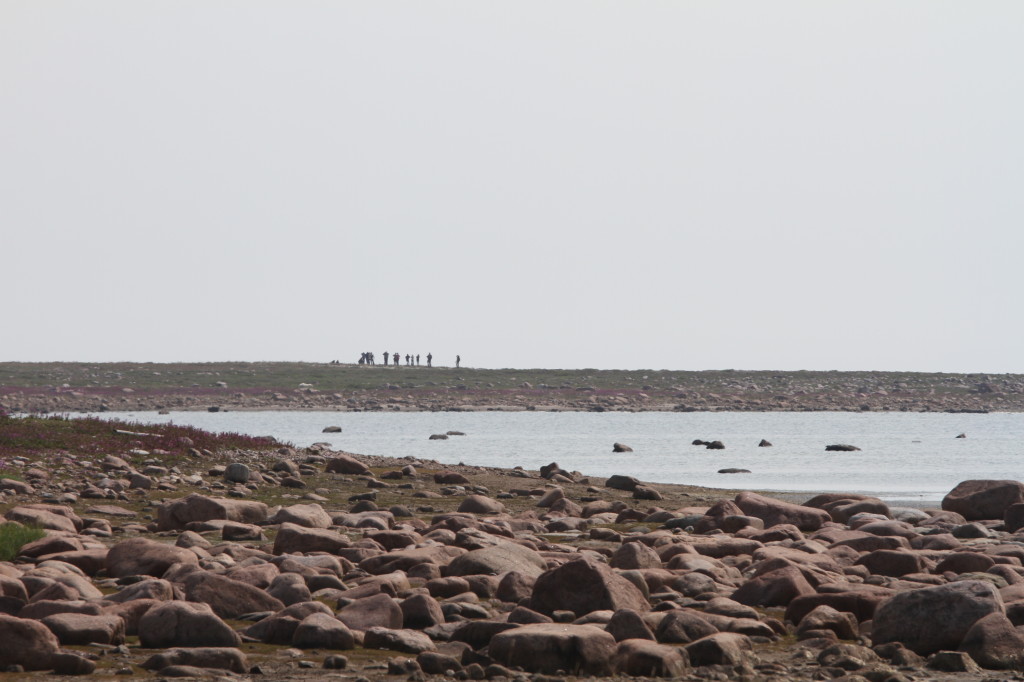 then there is the other mob of tourist away in the distance.

While we explore the stone circles we are observed. 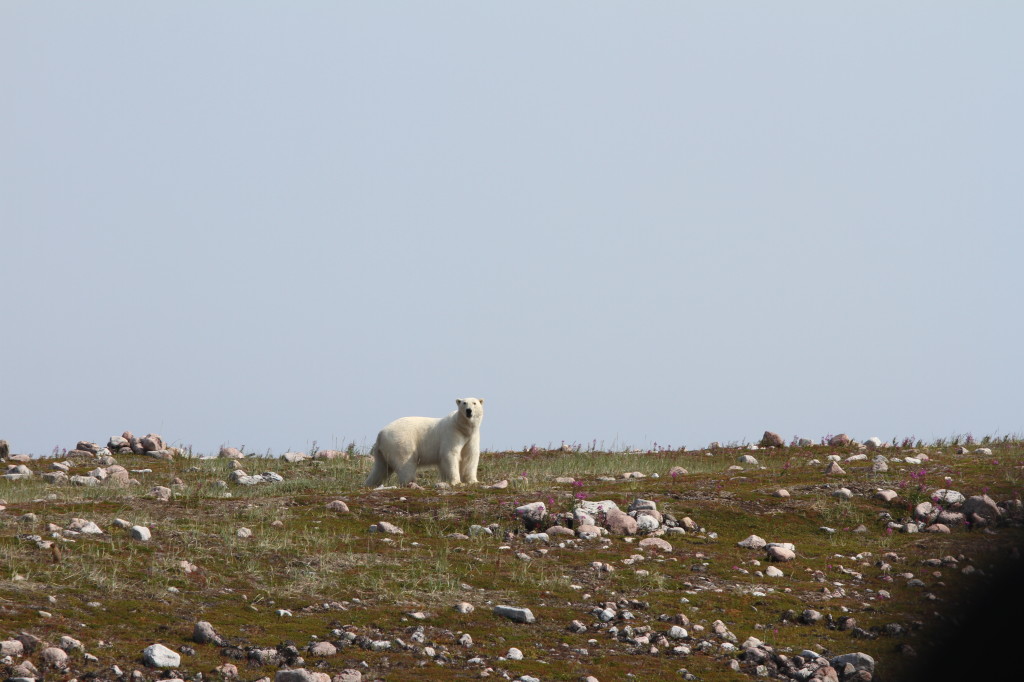 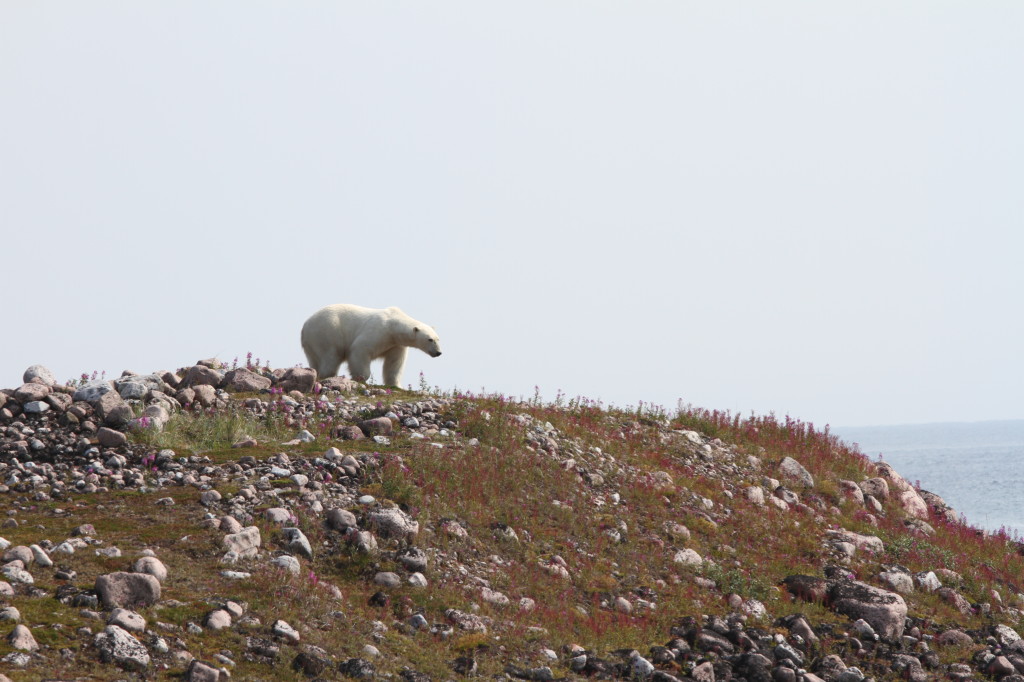 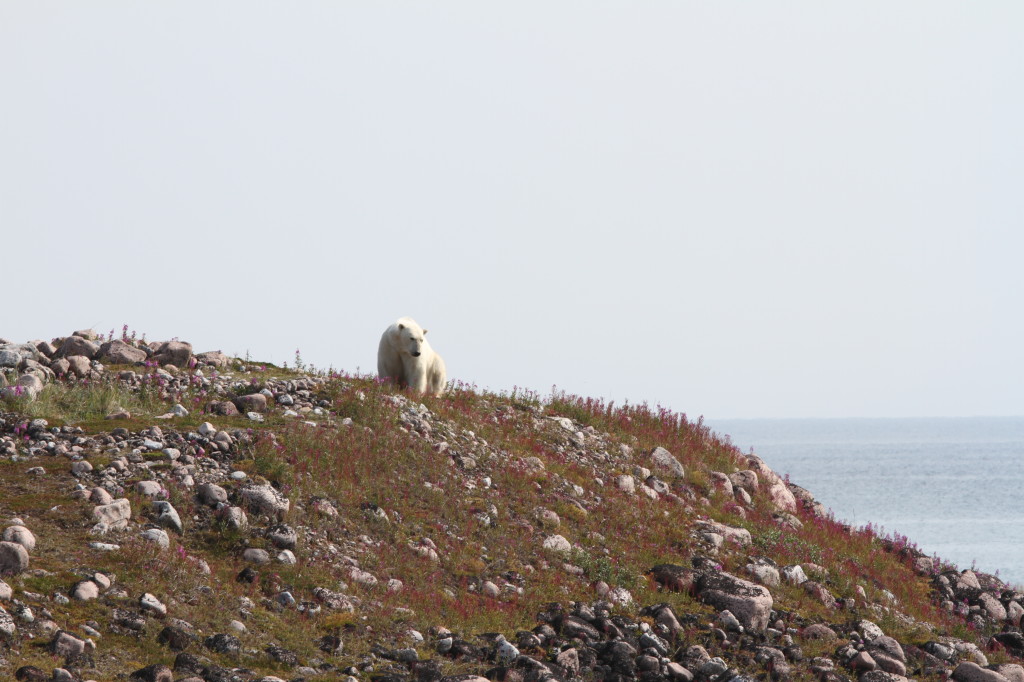 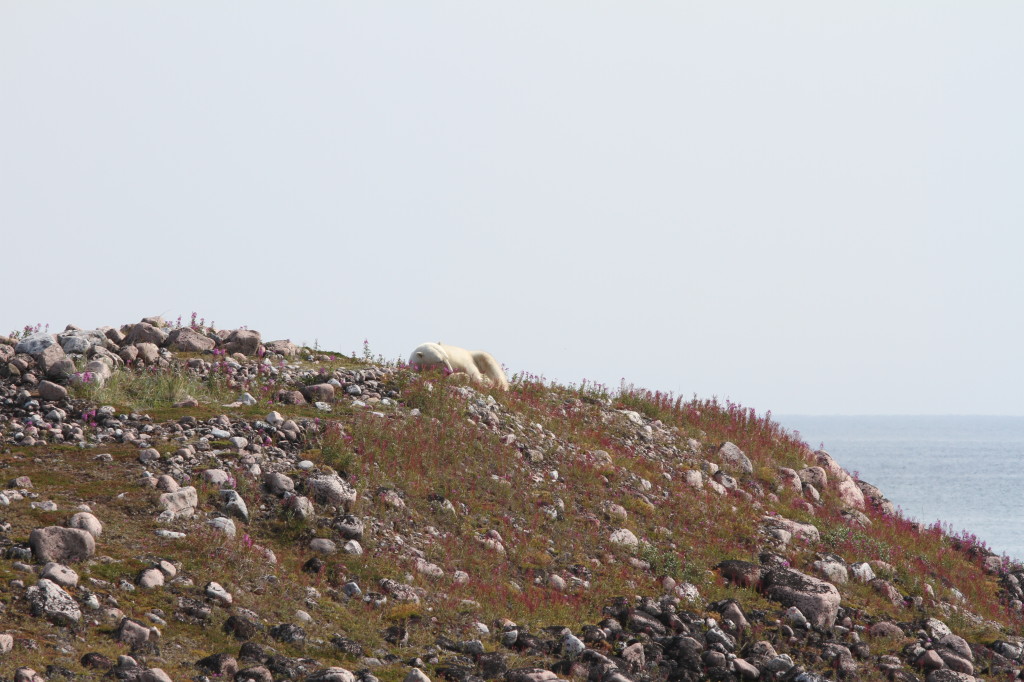 But found not to be a threat. 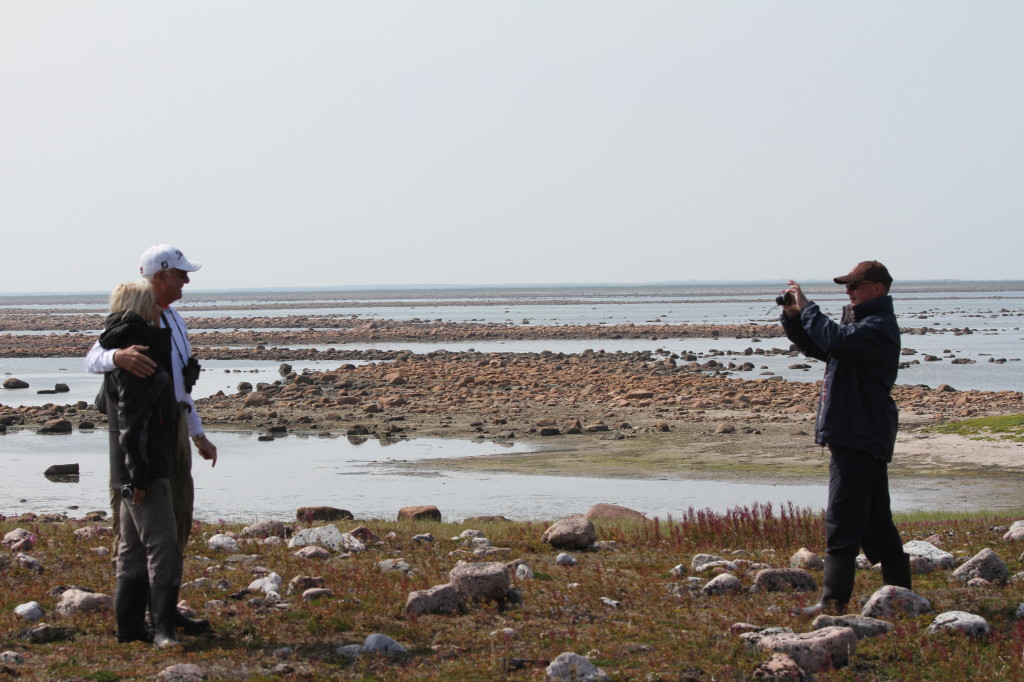 After a short time we have to head back to the lodge so we don’t miss the tide. 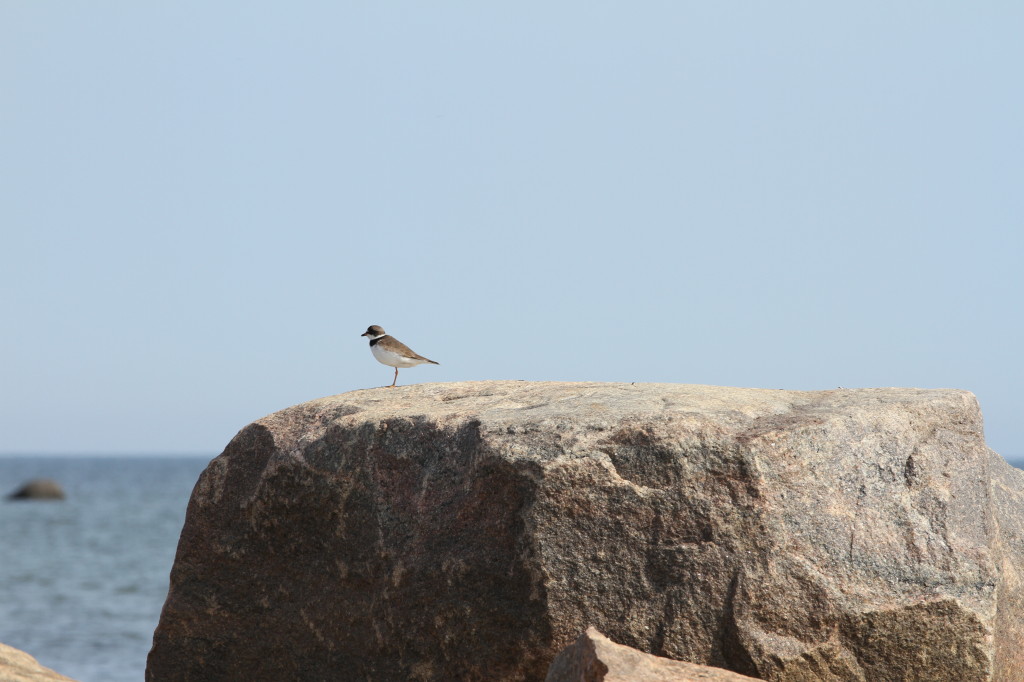 It is our final night, sadly. After another lovely meal it is time for a slideshow of photos taken over the week. This includes photos from the Chinese guests who have been camping out at Hubbard point. While communicating is difficult because we speak no Chinese and they speak little English – images transcend language and their work is amazing, particularly the bird photos.