We rise again at 6am so Charlie can fly the Copter. The early morning sun shining through the haze, possibly smoke from fires down south (something that you don’t immediately think of in a Country that seems so green and wet), reflects off the water and the mud flats exposed by the low tide.

The bear from the previous evening is still bedded down next to the compound. Charlie gives the Copter another go, and while the bear doesn’t seem too concerned it does wake her up and the copter flight is short-lived. 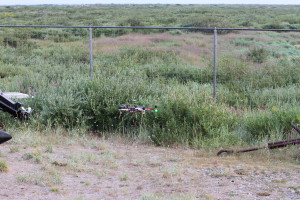 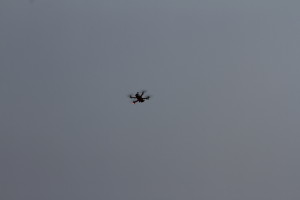 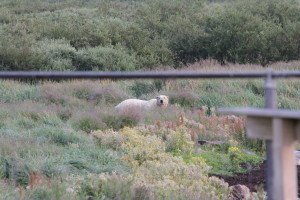 Today’s activity involves a trip in a six wheeler to the mouth of the Seal River. The “road” is a track made by previous expeditions, which at some points involves getting off and walking so the six wheeler can get through the mud. 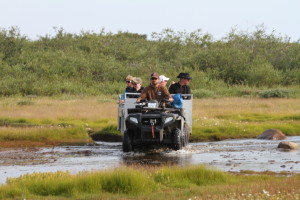 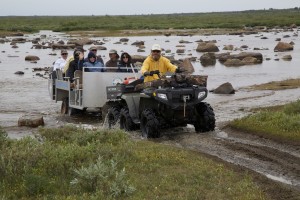 Along the way we stop to examine the footprints left in the mud – bears, wolves and bird prints are everywhere. Sadly, while the signs of lots of wolves are there, no wolves to be seen. A wolf pack ranges over many kilometres and in the heat of the day are probably camped somewhere cool and away from human disturbance.

Once at Seal River, after a picnic of sandwiches, “chilli” and chocolate and wild cranberry brownies (adventure is a hungry game) we go looking for bears.  We find wildflowers, birds and beluga – but no bears. 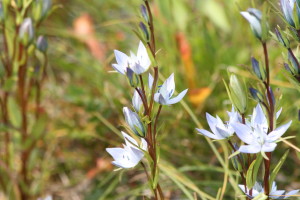 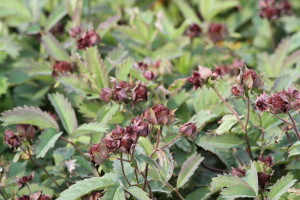 We inspect Jack’s shack at the mouth of the river . The shack provides a refuge for Kayakers coming down the Seal River who may, depending on weather, need to wait for days to be picked up .

Unfortunately the bears that abounded here in the last few days seem to have moved on – possibly due to the sight-seeing helicopter that had buzzed the area earlier. Many bears are not fond of the helicopters, as they are used to track and tranquilize them so they can be tagged and health checked.

While the six wheeler trip has been very interesting, everyone including the Guides are a little disappointed by the absence of bears. Only two days before I took the following picture of a bear sleeping soundly in front of Jack’s shack.

So we head back to the lodge, and find a bear in front of the lodge. 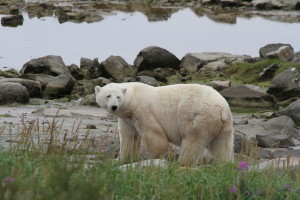 While the two six wheelers full of people wakes her up, Beauty doesn’t go ver far and settles down for a nap out of the wind near the front of the compound.

After a while she decides the sand is not as comfortable as rocks and grass, and head for the rocks under the dining room window. 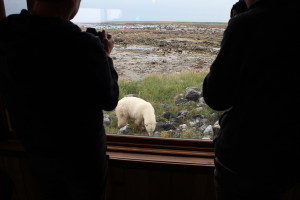 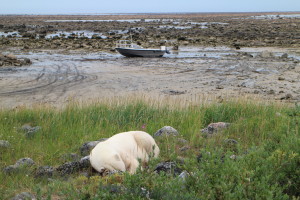 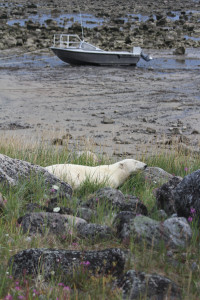 Watching people’s response is as interesting as Beauty’s indifference to the mob taking pictures, including selfies, with the bear (Charlie has video). 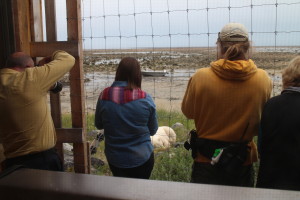 The evening entertainment is not over yet – DOB shows up again, and to it’s owner’s delight goes to inspect his new boat – he wants a photo of a bear in his boat (specially built to be bear proof – or should that be bear resistant?). 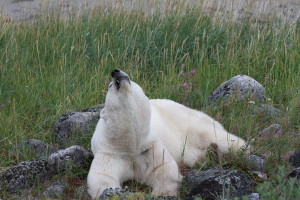 Fortunately, while alert, beauty does not seem to be alarmed enough to move. 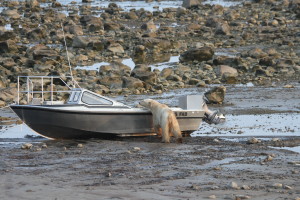 We are all crossing our fingers that DOB will get in the boat. 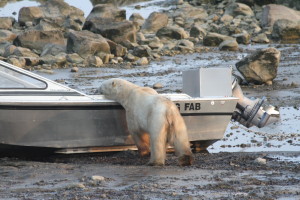 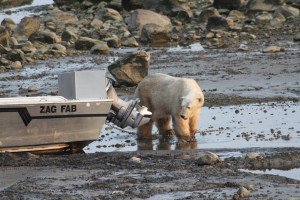 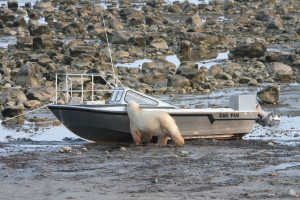 A bear needs to conserve his energy for more important things than climbing into boats that have no food to offer. After sniffing the boat all over DOB ambles off into the rocks.

Excitement over, Beauty settles down to sleep in under the Dining room window, while we settle in for another excellent repast. 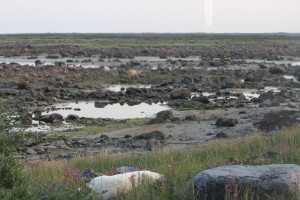 After dinner and a Q&A/presentation from one of our guides we retire early to bed. I can’t stay awake until sunset this time (around 9.40pm), so, sorry, no photo.