So Its time to try the Copter out. It had one test since we arrived in Canada, near Lake Louise. The agreement with the Lodge is it is ok to fly, so long as we don’t annoy the bears.

Charlie in his enthusiasm wants to be up at 5:30. I protest and negotiate 6am. Kinder to us and the rest of the Lodge. Also, if people want to go into the compound around the Lodge they need to tell someone. The Kitchen staff are up and working by 6am, so this seems a more reasonable time to rise.

The flight is a technical success (ie it flies and lands) but it disturbs a  bear that had bedded down near the lodge, and so the first flight is short.

Getting up that early is rewarded by bears playing in the morning light, photographer heaven. 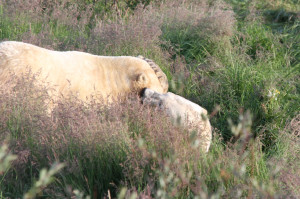 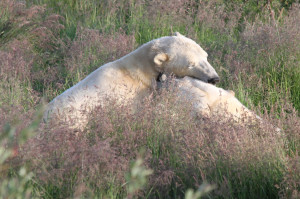 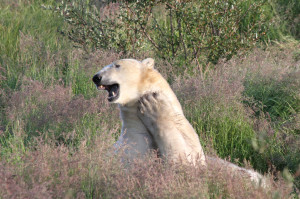 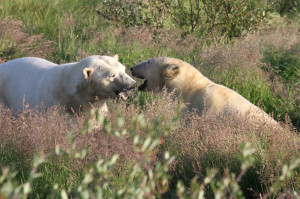 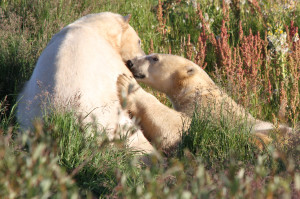 Once they are tired of play, the bears decide to pay us a visit.

One is brave and comes and checks us out at the fence, while his buddy sits back and watches, 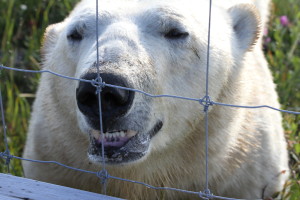 The curious bear seems to be the leader, once he has sniffed us over, he wanders back to his friend relaxing in the background and nudges and nips him into action. 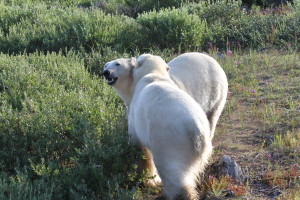 Charlie gets another short flight in before breakfast. 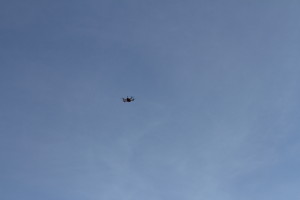 Another outing in the boats is planned, and while we await the tide we go for our morning hike. The adventure we are on is called “Bears, Birds and Belugas”, we have had the first and last of these in spades. There are a range of birds around, and we were lucky enough to get close to a pair of sandhill cranes. 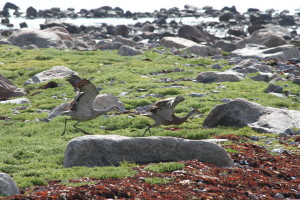 As well as the ever present and cute Sic-sic,

there are also hares around the compound. There are no rabbits in the region, only hares 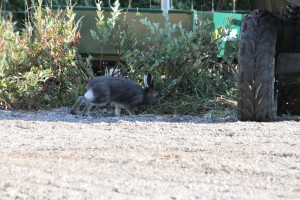 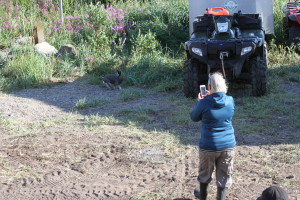 Charlie and I choose, with a number of others, to try our luck with the Beluga. Another group goes out on the other boat to bear spot at Seal River. While I don’t regret being Beluga bait again, the other party get to see a mother bear and cub playing in the water. I’m just a little jealous. 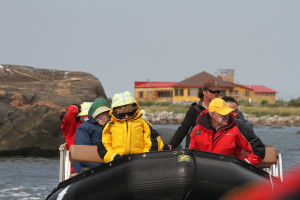 Hoods up, its going to be a rough ride

The water is very choppy, this makes for a rough bone shaking ride. Its also harder to see the Beluga underwater, but to breath they seem to be rising higher above the surface of the water compared to the previous day. 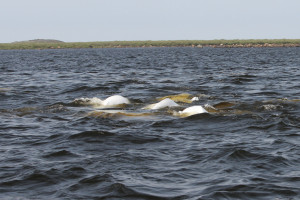 After returning to the lodge, our pre-dinner wander is short (a dry hike that does not involve clambering over rocks and across the inter-tidal zone – a welcome break) but fruitful as we meet a very beautiful girl.

DOB arrives, and frightens off the new girl.

DOB’s arrival makes returning to the lodge an interesting task, as the Guides need to navigate us around both DOB and a now unseen Beauty.

After dinner a small bear settles in for the night where the big boys had been sleeping earlier in the day. 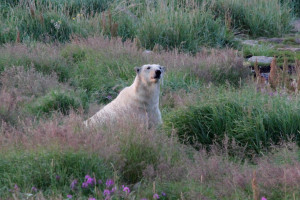