Swimming with the Beluga whales is on the menu today, but we need to wait for the tide to rise enough to get the boats out.

While we wait for the tide, its time for another hike. The last bear of the previous day DOB (Dirty Old Bear – he seems to have slept in something that has permanently stained his coat), is the bear du jour.  DOB had bedded down overnight just near the workshop. The lodge managers sleep in a loft over the workshop, outside the compound. To get to the lodge they had to tip toe quietly around DOB, leaving him undisturbed until we set out for the hike.

We leave DOB settled down by the wood pile. 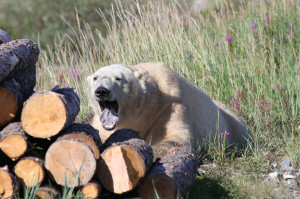 Later, while we wait for the tide, the warmth of the morning wakes DOB and he wanders off into the water for a cooling swim (this makes no difference to his colour). 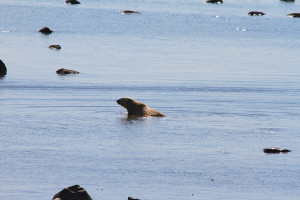 We will see DOB a number of times over the next few days – a very mellow bear.

Finally, the tide is in and we embark the Zodiacs for a ride down to the mouth of the Seal River, where the Beluga come to feed on spawning fish and give birth in the warmer water from the river. Water temperature is about 10 degrees Celsius.

The day is bright and clear, the sky intensely blue. There are birds everywhere fishing alongside the Beluga. Unfortunately, too far away to get images that give more than just the impression.

On our way down to the Seal River, the Beluga surround us, they are everywhere you look – but very hard to photograph because they are quick and unpredictable. 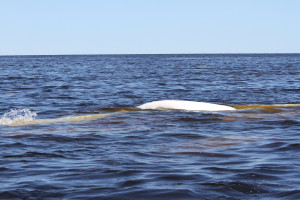 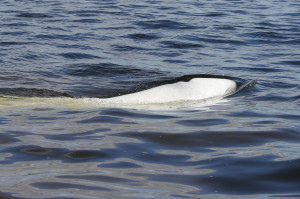 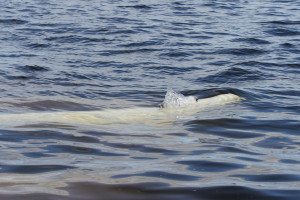 Waiting for us at Seal River is another bear, swimming in the water. He sees us too. He may be there to cool off, but the Guides speculate he may also be there to try his chances of catching a sick or young whale. 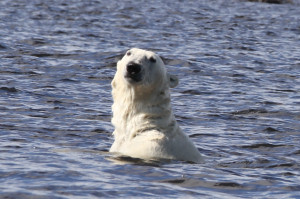 Polar Bears systematically hunting Belugas is not scientifically documented, but twice in the week at Seal River we see evidence that they can catch them, and at least in one case the bear got to keep its booty. Bears get very little to eat over the summer, and spend most of their time conserving energy by sleeping, but sometimes they get lucky.

Swimming with the Belugas at Seal River is not strictly swimming. It’s more like trawling for Belugas with human bait. 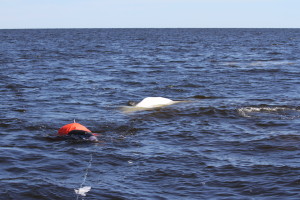 First one puts on a mask and snorkel and dry suit over clothes. Then you climb into the water, suddenly almost too buoyant to stay upright thanks to the dry suit.

Next you flip over, face in the water and a rope is tied around your feet. The boat starts to motor slowly along and you are pulled along in its wake. 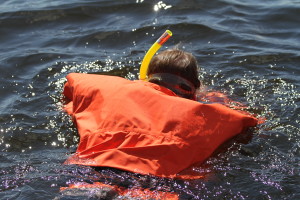 The process creates much amusement for those left on board and bad humour along the lines of “does my backside look big in this suit” abounds (maybe it’s the company we are keeping). I believe there was some speculation as to whether it was worth it to Charlie to pull me in or leave me.

Once in the water the instructions are to sing and make other noises to attract the whales. Singing through a snorkel means throwing dignity to the winds (noting it has already gone once your suit hits the water) but it is well worth it. I found Somewhere over the rainbow, clicks and the occasional silence worked best for me.

Our first volunteer goes in, and has some success. When Charlie goes in with his underwater camera he is mobbed. Either he sang the right songs or the Beluga just wanted to be in the movies (or eat the Camera). As a number of people on our boat don’t want to play and we are all having lunch, Charlie gets 30 mins in the water, rather than 15-20.

The following underwater images are from Charlie’s video, shot on his Sony NEX 5N in an underwater housing. The water is tinted with organic matter from the river water mixing with the sea water, these nutrients are probably what makes this an ideal spawning ground for fish. 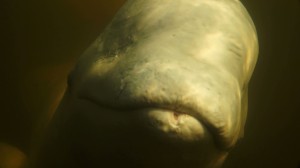 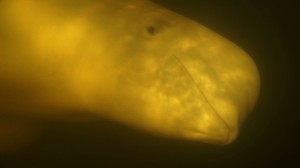 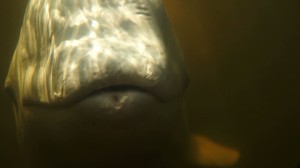 My turn comes around, I’m in for 38 mins. It is the most incredible, up close and personal wildlife experience I have ever had. As the Beluga swim up to you, because they can turn their head (due to extra vertebrae other whales don’t have), the interaction is very animated. 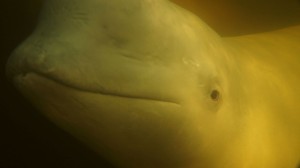 Screen shot from Charlie’s camera – the high quality video made lugging the underwater housing across Canada worth while.

Whole family groups look us over. Mothers bring their grey calves (see in the background above the two adults in the photo below) for a look at the funny human, and then just as quickly turn their bodies to shield them. 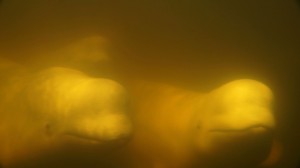 Other whales nibble at the toggles on the suit, or slip  directly under us blowing bubbles as they go. 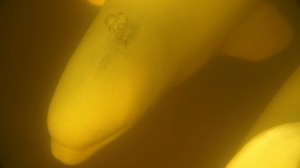 Unlike Charlie’s Camera, no one tries to mouth the GoPro I’m running – but it seems they would very much like to and a couple of times I pull it back. 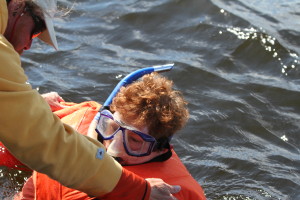 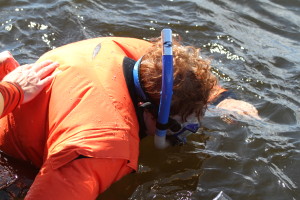 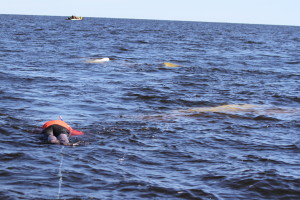 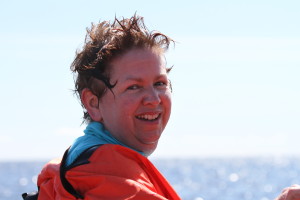 Finally its time to go so we can beat the tide, but the fun is not yet over. On our approach to the lodge we spot a bear swimming (not DOB). The Guides quietly pull the bear spray, flares and remove shot guns from their waterproof covers – a reminder that this is an animal that can move very fast in water, and the water is shallow enough for them to stand on their back legs. The bear is concerned about the outboard motor noise and moves off without challenging us. 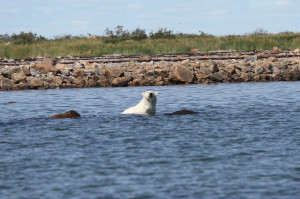 Once back at the lodge its time for drinks and nibbles, followed by another excellent dinner. The chef/cook seem to have the view that we are all going to waste away from exertion and seconds are offered and then dessert. Bed time comes early to a happily tired and well fed group. 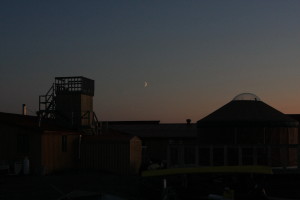